Please note: this Bulletin is being put on the website one month after publication. If you would like to receive the Bulletin as soon as it is published, please contact the Membership Secretary about joining the Lewes History Group.

This talk is rearranged from our snowed-off March meeting. Apologies to those who did not learn of the cancellation in time. Mention of Lewes these days does not conjure up images of an industrial town but, during the years that preceded and followed the Industrial Revolution, Lewes might genuinely have been described as a hive of industry. In this talk, John Davey will trace the 19th century growth and the 20th century decline of the manufacturing industries that – for 100 years – provided employment for most of the menfolk of Lewes.

Source: This very early photograph of School Hill was taken by E.A. Nicholson about 1859 and published with the third volume of the Sussex Record Society’s transcription of the ‘Town Book of Lewes’.

This postcard of the ‘Recreation Ground, Lewes’ was published by the Mezzotint Company of Brighton, and will date from the Edwardian era. The card was posted in 1909. When I acquired it I assumed that the view shown was the gardens of Southover Grange, but now realise that at that date the Grange was a private house. So where was this photograph taken? Somewhere down near the Pells? 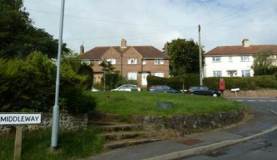 Do you recognize this little corner of the Nevill Estate?  A local man who was brought up in South Way remembers it in the 1950s as “a scruffy place – rather unkempt and overgrown with small shrubs and bushes – and fouled by dogs and other animals. Hardly a plantation fit for a King!”  But that is what it was intended to be when it was created on the corner of South Way and Middle Way in the winter of 1935 -6.

In the 15 years since the Mayor, Alderman A.E. Rugg, had turned the first sod on the Nevill Road site for the first two dwellings in 1920 much of the estate had been built.  People were living in the council and private houses constructed on the now complete North Way, some of them prison officers new to the town.   Building on South Way had begun in the early 1920s, though numbers 34 to 54 were still to appear.  There was a constant stream of planning applications on the estate for sheds and garages.

Mr J.H. Every of the Phoenix Ironworks, a recently retired member of the Council and Mayor between 1903 and 1905, had been chair of the Housing Committee in the planning stages of the Nevill.  The Sussex Express said he had given “33 years of unstinted and unselfish service to the council and the inhabitants of the borough”.  In May 1935 he presented six beech trees to the estate as a Jubilee Memorial.  At this time the Council for Preservation of Rural England was urging local authorities to celebrate the Jubilee by the preservation of open spaces and the planting of trees so that “All classes will be benefited.” 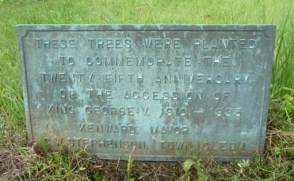 Some months before, the people of the new Nevill Estate would have been very much involved in the week-long series of events that celebrated the King’s Jubilee on May 6th 1935.  The children of Lewes gathered for a “demonstration of loyalty upon the Dripping Pan”. They were given a bag of cakes, a bag of sweets, an orange and a free trip to the cinema.  The elderly were entertained by the Rotary Club.  There were thanksgiving services and broadcasts of the King’s speech from Buckingham Palace.  Gabriel, the town bell, was rung and a torchlight procession through the town ended with a bonfire on Race Hill.  You can read all about it in the Express and the Sussex County Herald.

It was decided that Mr Every’s gifts were to be planted on a green space at the junction of Middle Way and South Way.  “Conveniently arranged steps” were to be constructed and a fence was to be erected around the trees.  The Borough Council agreed that this was to be paid for out of the housing budget.  By New Year’s Day 1936 the Borough Surveyor reported that he had “carried out works of making up South Way to the terminus of the Housing Estate, paving footways, and the construction of an island garden 37 feet 6 inches in diameter.”  The memorial tablet was to be fixed to the new fence.

Perhaps someone has pictures or memories of the ceremony when this happened?  It did not appear in the local press, probably because George V’s final illness and death dominated the news by the time the trees were planted.

Lewes Library has on its shelves a long series of Pike’s Blue Books for Lewes, Newhaven & Seaford published at regular intervals during the early 20th century. They list Lewes householders in street order and in alphabetical order, so you can identify where people lived and who their neighbours were. There is also a trade directory, a sort of early yellow pages. Extracting, for example, the Lewes blacksmiths gives the following:

The Blue Books seem to show quite a rapid turnover of businesses, or at least of those businesses choosing to advertise their services, during this period of quite rapid technological change.

Few people choose to hang around in Fisher Street today. The narrow pavements, the continuous traffic and probably the worst air quality in Lewes hurry us on to our destination. Fisher Street contains some of the more interesting old buildings in Lewes, but you cannot easily get a clear view of them in the narrow lane. No one has yet suggested it as a subject for one of our Street Stories. Postcards of Fisher Street are quite uncommon, probably for these same reasons.

This postcard, probably from shortly after the end of the Great War, chooses to focus on what is, to 21st century eyes, one of the least attractive buildings in the street. These council offices, in a mock-Tudor style that fits awkwardly into the streetscene, are now being vacated and will shortly be declared redundant by Lewes District Council. One wonders what alternative use they will find. Another elaborate building from much the same period, across the street, appears increasingly derelict. Yet the anonymous postcard maker selected this for his subject.

Was there greater civic pride a century ago?

The Lewes History Group has now become a formal organisation with a chair (Ian McClelland),a treasurer (Ron Gordon) and a bank account, albeit not yet a secretary (position vacant). We already have almost 100 members, to whom this Bulletin will be circulated, plus another 200 friends, who will receive notice of our meetings and events. Neil Merchant is our membership secretary.

Our website, created and maintained by Barbara Merchant, https://leweshistory.org.uk/ received over 15,000 hits last year, and now includes a membership page. This is becoming a great resource for anyone researching Lewes history topics. The group is also now on Facebook www.facebook.com/LewesHistoryGroup and you can follow us on Twitter @leweshistory, at twitter.com/LewesHistory.

This entry was posted in Economic History, Lewes, Local History. Bookmark the permalink.