In his talk Bob will be showing dozens of previously unseen images of Lewes, taken from his unrivalled collection of postcards and photographs, to illustrate some of the changes in Lewes within living memory. Many will be from the 1950s, 1960s and 1970s, but to justify his title he will be hoping for some 90-year-olds in his audience. As usual he will encourage audience participation and challenge our knowledge of old Lewes. 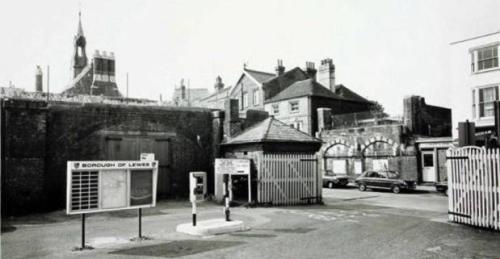 This 1960s photograph shows the railway bridge across the High Street removed, but the embankment that carried it still remains. Only the Fitzroy Library has survived redevelopment.

One of the rights of the lord of the manor of Southover was to seize the houses, goods and chattels of any felons convicted within his lordship. Thomas Walker Horsfield records three examples when this occurred in his ‘History and Antiquities of Lewes’ (1824), p.298.

By the early 19th century the Twelve, who governed the old borough of Lewes, were finding all the detailed work of managing a modern town something of a challenge, so by an 1806 Act of Parliament established Improvement Commissioners to be responsible for the paving, lighting, cleansing, watching (policing) and repairing of the roads and public spaces of the borough of Lewes. The Commissioners were still linked to the old borough – the first meeting was presided over by the senior constable chosen for that year.

In 1828 the Cliffe, still a legally separate entity, followed suit, sponsoring its own Act of Parliament and setting up its own Improvement Commissioners. Southover, again separate, established some inspectors of lighting in 1847. All these powers were passed to the authorities of the new Borough of Lewes in 1881.

“In the parish of All Saints, at a short distance from the bridge, and south of the street, stands the mansion of the late Sir Ferdinando Poole, now in the possession of Mr George Verrall. This substantial building is upon the scite of the ancient religious house belonging to the Grey Friars of Friars’ minor”.

The Grey Friars priory was suppressed by King Henry VIII. Horsfield could not piece together a complete history, but recorded that in about 1545 its site was sold to two dealers in former monastic properties, William Heydon and Hugh Stukely. In 1557 they sold it on to John Keyme. A 1586 inquisition post mortem re the estate of John Keyme esquire, who had died the previous year, found that he had held of Queen Elizabeth by knight’s service the site or house of the Grey Friars in Lewes, a stable and 16 acres of land, and that his heiress was his niece Joan, daughter of Richard Keyme and wife of George Powlett. In another inquisition post mortem held in 1632 John Shirley, armiger, had at his death held of the King by knight’s service a capital messuage [mansion] called the Grey Friars in Lewes, with the lands and tenements belonging to it.

By 1682 it was in the ownership of William Pellatt gentleman, and it remained in the ownership of his descendant Apsley Pellatt until 1803. If this is correct then Sir Ferdinando Poole (1731-1804), a great horse racing enthusiast and friend of the Prince George (the future George IV), must have lived here as tenant to the Pellatts. In 1803 the property was bought by auctioneer George Verrall, who sold off much of the plot for development. In 1816 the Tabernacle was built on part of the grounds. In 1826 (after the publication of Horsfield’s book) Nehemiah Wimble (1778-1843), ironmonger and one of the Tabernacle founders, purchased the mansion from George Verrall’s executors, and entertained King William IV there when he visited Lewes in 1830. Nehemiah Wimble lived at The Friars until his death, and in 1846 his executors sold it to the Brighton & South Coast Railway Company, who demolished it to make way for the first Lewes railway station.

Edward Chatfield (1814-1885) has appeared twice before in these Bulletins. Bulletin no.87 identified him as a timber merchant, and the builder of the S.S. Wallands, launched from his Bridge Wharf on New Year’s Day 1866. Selected entries from an 1867 local directory in Bulletin no.55 listed him as a coal timber and slate merchant, a proprietor of steam saw mills, a ship and barge builder and a shipowner, based at North Street, Lewes, and South Street, Eastbourne.

He was baptised at All Saints church on 29 May 1814, a younger son of Thomas Chatfield (1786-1876) and his wife Frances (1787-1868). Thomas Chatfield was the son of John Chatfield, a tanner and fellmonger with premises in All Saints parish. At his 1807 marriage Thomas was also described as a tanner, but soon afterwards he established himself as a coal merchant and then also a timber merchant. His mother Frances was a daughter of butcher Trayton Paine, so Edward Chatfield’s family was long established and well connected in the Lewes business community. His father Thomas was constable of the borough of Lewes in the year Queen Victoria inherited the throne, and served again in this role a few years later. He was an active promoter of bringing the new railway to Lewes and of improvements to the Ouse navigation. In 1852 Thomas Chatfield retired from the partnership of Chatfield, son and Sampson, and in the following year Edward Chatfield and his partner Alfred King Sampson, timber, slate and coal merchants of North Street, also bought the South Street business and premises of their main rivals in the timber business, Charles Wille. In the 1861 census Edward Chatfield employed 35 men and 7 boys. In 1864 his partner Alfred King Sampson died, and he continued the business on his own.

In the 1841 census Edward Chatfield lived with his parents on the High Street in All Saints parish. In 1844 he married Elizabeth Lash, the daughter of a Suffolk merchant, and in the 1851 & 1861 censuses they and their growing family were living at the other end of the town, still in the High Street but in St Anne’s parish. There were at least nine children born between 1845 and 1861, though one daughter died as a baby. By 1871 the family had moved to St John-sub-Castro parish, and lived at 5 Wallands Terrace. However, by this date Edward Chatfield had become heavily involved in the development of St Anne’s Crescent, and not long afterwards moved to the grand house he built there for himself – he called it ‘Belle Vue’, but we know it as Southdown House, for many years the headquarters of the County Library service. He lived there in 1881, by which date he employed 60 men, and died there in 1885 aged 70. 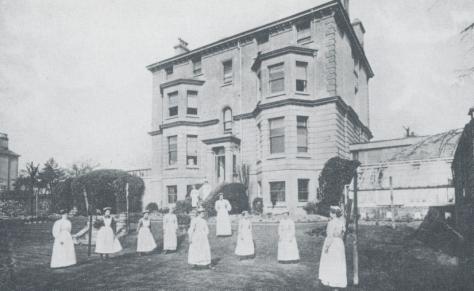 Like his father and grandfather, Edward Chatfield played a prominent part in the public affairs of the town, serving as a trustee of town properties, as a headborough in the year following his marriage, as a parish officer for St Anne’s parish and as high constable in 1863 and again in 1866. The 30 May 1865 Sussex Advertiser reports that Edward Chatfield, timber merchant, had with his accustomed liberality held his annual festival, presumably for his employees, at the Crown Inn.

The Chatfield’s business was continued by his eldest son Colonel Thomas Chatfield (1845-1899). Colonel Chatfield’s title derived from his having been the first Captain commanding the Lewes battery of the Sussex Artillery Volunteers, from which role he was promoted to become the commander of the whole county regiment. In the 1881 census he and his family lived at 118 High Street, St Anne’s, but he later moved to a new house at 7 King Henry’s Road, for which he had plans drawn up by a London architect shortly after his father’s death. He was elected one of the first councillors of the new Lewes borough in 1881, and immediately promoted to the rank of alderman, a role from which he retired in 1885. He moved to Montpelier Road, Brighton, before his death there in 1899, aged 53.

In last January’s edition of Viva Lewes, there was an article about the history of the area known to many as the Magic Circle, behind the bowling green in the castle precincts. It was a classical feature within the large gardens of Castlegate House, created during the First World War by the Irish author Frank Frankfort Moore. This magnificent photograph from the Reeves collection, taken in 1916 and reproduced here with permission, shows it at its best. 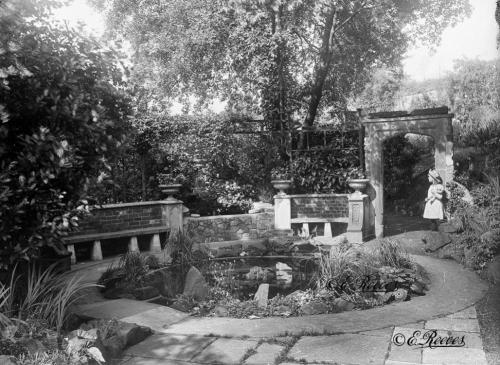 Over time it came into public use and for decades has been part of the short-cut down the steps into Castle Ditch Lane.  It became an overgrown and thus hidden area – the water feature was removed and vandalism badly damaged the parts of the original structures that remained. For some years the Friends of Lewes Society has been planning to do something about this area, believing it can be reinstated with a nod to its first purpose as a place to pause and reflect in pleasant surroundings. Rebuilding the classical stonework is not realistic, but it can still be a feature on a key tourist route from the castle precincts back to the High Street.

The bureaucratic processes of establishing a Right of Way and ownership took years, but are now complete. The original circle will be repaved and the path improved; wooden seating of a robust nature will be provided, the shrubbery will be reduced and replanted and alongside, facing the car park, another area with a more open circular arrangement of seating will be created, with associated landscaping of the surrounding area.  More details will be available after archaeological exploration and full permission from Historic England has been obtained.

It is planned to have this work completed by the centenary of the peace at the end of World War I and for the whole area to be known as a Peace Garden, echoing the title of the book by its creator Frank Frankfort Moore – A Garden of Peace. 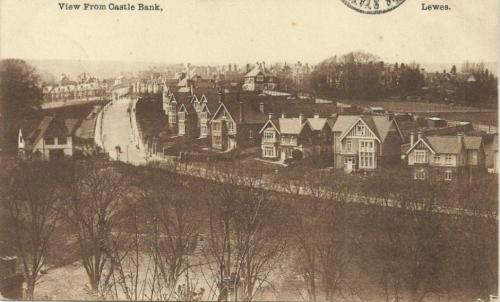 This view of the Avenue and Bradford Road from Castle Bank shortly before the start of the Great War was published by the Mezzotint Company of Brighton. This postcard was postmarked 1914.

Alice Paris (born in Ringmer in 1896) and her younger sister Ethel Paris (born in 1898) were the two elder daughters of the manager of one of the village shops. They both left Ringmer Council School at the age of 14, and both were apprenticed at the large Dusart’s shop, opposite the town clock on Lewes High Street, which sold wool, china, glass and many other items. Their apprenticeships to teach them the art of being a sales assistant were to last three years.

Mr Dusart was well known for his parsimony. The girls worked a six day week, cycling into Lewes in all weathers to start at 8 a.m. in the morning and working until 6 p.m. at night. On Saturdays they had to stay at work until 7 p.m. They were required to work extremely hard for their wages, which were 1s 6d per week for the first year, 2s 6d per week for the second year and 3s 6d per week for the final year. Most of this had to be given to their mother to pay for their keep. Ethel Paris worked at Dusart’s for 5 years. After their work finished both sisters attended evening classes in Mountfield Road to learn shorthand and typing. This qualified them for employment at County Hall, where their wages were 18s 0d per week (90p in today’s money). They thought this was a fortune.