As usual, we not shall have an evening meeting in August. Our next meeting will be on Monday 10 September, when there will be three short talks by members on different aspects of Lewes Heritage

This fine early photograph of the Molineux & Johnston Paper Mill at the Pells was posted on the Lewes Past Facebook page by Mick Symes. The mill opened in 1802, and was joined by a second paper mill at Isfield in 1809. When the site was sold in 1857 it was noted that the mill had long been vacant, was standing derelict, and that the building materials would be auctioned separately.

It was reported to Lewes magistrates in April 1663 that a man called John Clarke, who had been ‘taken wandering in the town’ had received ‘correction’ in the House. They ordered that he should be despatched to the gate side of Newcastle in the Bishopric of Durham, his alleged place of birth.

The magistrates assembled at Quarter Sessions in October 1669 considered the case of Susan Cleaver, an indentured apprentice to Philip Bennett of Southover, gentleman. They heard that she was now aged 21 and upwards, so determined that she could be discharged from her apprenticeship but that her master should provide her with two suits of clothes.

In the 17th century orphaned or abandoned children of both sexes could be apprenticed by the parish when as young as six or seven years old, so Susan Cleaver may perhaps have lived and worked in the Bennett household for as long as she could remember. Girls were typically apprenticed to learn housewifery, in return for their keep. The fact that, unusually, a magistrates’ order was required for her discharge implies that she was unwilling to leave. 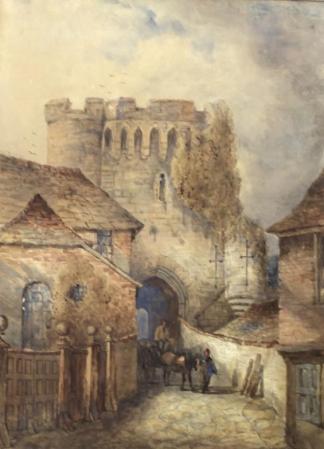 This view of the Barbican entrance to Lewes Castle was offered for sale at Gorringes weekly sale on 30th July.

It is catalogued as being a 19th century English school watercolour in the style of Samuel Prout (1783-1852). He was painter of watercolours in ordinary to King George IV and later Queen Victoria. A contemporary of Constable and Turner, his prolific work was commended by Ruskin and much more popular in the 19th century than it is today. His watercolours were finished in his studio, on the basis of a pencil drawing made on site. This lot is estimated to fetch £80-£120.

You can register with the auctioneer to receive alerts of lots related to Lewes being offered in forthcoming auctions.

This Edwardian PPCo postcard of Lewes High Street shows the view looking eastwards from St Michael’s church and the Brewers Arms. On the right is a shop advertising hot and cold baths for 6d, hair cutting and shaving.

This photograph of a military steam lorry during the Great War is thought to have been taken in Lewes. Can anyone identify where in the town it was taken?

At the end of the Great War the Westgate Chapel Literary Society arranged a series of talks on the theme ‘Problems of Reconstruction’, which led to the production in 1919 of a slim volume with the same title edited by the minister, J.M. Connell, and published by W.E. Baxter Ltd. The extracts below are from Miss E. Fowler Tutt’s contribution entitled ‘Women’s Work’.

“The woman endowed with a measure of public spirit must concern herself with municipal affairs generally. She has long had the municipal vote, but I do not find she has availed herself of it to any great extent. In fact at ratepayers’ meetings and kindred gatherings, which I have attended, I have invariably found her conspicuous by her absence. If women are going to concern themselves now seriously with Imperial politics they must first serve an apprenticeship with municipal ones. They must come forward in increasing numbers as Town Councillors, Guardians and County Councillors.

The women voters should learn to discriminate between candidates offering themselves for election. They should make a clean sweep of all those members whose sole idea of serving their town is the saving of the rates, not the judicious spending of them, so as to obtain the best value. Too often the niggardly and cheeseparing policy of saving a penny has resulted in the compulsory spending of half-a-crown, and only a shilling’s worth of value to show for it. With that kind of candidate must go those who will not progress, whose whole weight is placed on keeping things as they are, who fear or sneer at reforms, who see ruin in every forward movement. The wouldbe political woman has all her work cut out for her already. A very great deal of propaganda work will have to be done by the sensible and high-minded of them to teach the female voter how best to use her vote for Imperial affairs. By the judicious use of it she can secure better conditions of life, better houses, better wages, and better chances for her children.”

Miss Fowler Tutt goes on to identify better housing as a key concern, and adds “We must have women architects”. She notes that properly salaried and uniformed women police have now arrived, and commends them for their better approach to preventative work. She also calls for the appointment of women as magistrates, and special women’s courts to try cases affecting women and children. Women must also take up the study of the law – “How many women really know that they have no legal right whatever to their own children? Many would be absolutely shocked if you told them so, but that is the law as it stands on the Statute Book today. There are many more, equally one-sided. Man alone made those laws, and his own will and pleasure were the only things considered. The time has come when women must demand equal moral rights, equal parental rights as well as equal economic rights.”

She saw the greatest need of all as for moral reconstruction, based on self-control, self-respect and self-discipline. “The problem of the unbridled freedom of the girl will have to be faced. The present unrestrained and coarse demeanour is going to bring disastrous results in the near future.” She notes, as a teacher, “In hundreds of thousands of cases a child gets its first glimpses of right and wrong in an Elementary School. Many have never obeyed anyone in their lives before they learned to obey their teachers.”

She is particularly concerned for all educated women with leisure to play their part. “Thousands of such women have not even after four years of war taken up any voluntary work, and never intend to. I should like to advocate conscription of women. Every woman, no matter what her age or grade, should be compelled to show she was doing some work for the good of the community. The penalty for non-compliance, through laziness or indifference, should be a substantial fine, put into a common fund from which to make grants to needy work centres. These fines should be demanded with the regularity of the income tax assessment, and in proportion to that income. There should be no idle rich, or idle poor or idle middle class.”

This attractive pen and ink drawing of St Anne’s Crescent appears quite modern, but is unsigned. It was offered for sale on ebay two years ago.

It was with shock and much sadness that his fellow members of the Sun Street research group learned of the death of Brian Cheesmur on 14 July. As befitted the retired managing director of his family’s prestigious building firm, Brian’s most evident contribution to the Sun Street project was his expertise as regards traditional building materials and methods, enabling the actual process of constructing the street to be described in The Sun Street Story. This was coupled with a lifetime’s knowledge of the Lewes area that provided him with a fund of tales – about houses he had worked on, and others besides. Indeed, as well as professional skills, what Brian brought to the Sun Street project was his enthusiasm, unfailing good humour, and sense of fun. He readily took part in our ‘stage version’ of one Sun Street episode, supplying such props as an authentic hare wire, and gleefully and memorably tossing his cap in the air when the local lad he was playing was acquitted of stealing turnip greens.

The celebration of Brian’s life is being held at 2 pm on Thursday 2 August at Woodvale Crematorium, followed by a gathering at the Anchor Inn, Ringmer.