During the 16th and 17th Centuries a succession of freehold sales propelled much of the lands of South Malling Manor into private ownership including, by the 1620s, the Mill Field on which stood Malling Mill. I am unsure of the precise date of the transfer: my ability to decipher manorial rolls in mediaeval Latin is, sadly, unequal to the task of making that discovery.

Milling corn was undertaken in Mill Road for more than 300 years, from at least the late 16th to the early 20th Centuries. The windmill was one of a ring of mills on the Downs above Lewes. The mill, its outhouses and stables were the only buildings in Mill Road until the early 19th Century when Mill House was built.

The earliest reference that I have found to milling corn at Malling is to the miller, John Gallop, in 1596.[4] The first documentation of ownership dates from 1626, when John Parson, ‘cutler of St Katherine’s next the Tower of London’, inherited the windmill, stable and barns from his brother, William[5]. Parson in turn gave the property to another brother, Thomas, in the same year, presumably as part of a rationalisation of the family’s estate. Thomas Parson owned the windmill until 1634, when he sold it ‘and the banks whereon it was standing in South Malling’ for £60 to Cornelius Fox, miller of Heathfield. Seventeenth Century millers include John Bayley and John Kenner, Levy Edmonds and Fox himself. In 1645 Fox’s widow was charged 1 shilling and 8 pence poor rate ‘for his Mill’[6] and in 1649 was named by Constables as one of the millers having taken ‘much more toll in these dear times than is their due’.[7]

A fairly rapid succession of owners and millers followed until the mid-18th Century when William Hoather bought ‘a messuage (a dwelling house with outbuildings and land assigned to its use), windmill and lands in South Malling commonly called the Mill Green’.[8] The mill remained in the Hoathers’ ownership for more than 30 years. In 1806/7

Thomas Packham bought the freehold in two stages from Thomas Hill and it was the Packham family who, from 1810, undertook extensive renovations. These included, by 1817, an additional, wooden, upper floor to the roundhouse, by which means the height of the mill was raised by about 6 feet. H.S.E. Simmons, an authority on Sussex windmills, describes the mill at that time as ‘one of the finest in the county’.[9]

John Hamlin bought the mill in 1817 and it remained in his and his devisees’ possession until at least 1851. David Morris was the miller from 1822.[10] and in 1826 he agreed with Hamlin a 14-year lease of ‘All that messuage situate on the West side of Malling Hill … and mill called Malling Mill with the garden, yards and outbuildings and erections … and also all that piece of meadow land thereto adjoining called the Mill Field’.[11] The house and mill in 1844 covered an area of 1 acre, 0 rods and 1 perch.[12]

The main road from Lewes towards Uckfield originally passed to the east of the mill, shown for example on William Figg’s map of 1824 (below). The windmill is depicted in the top right-hand section of the map. 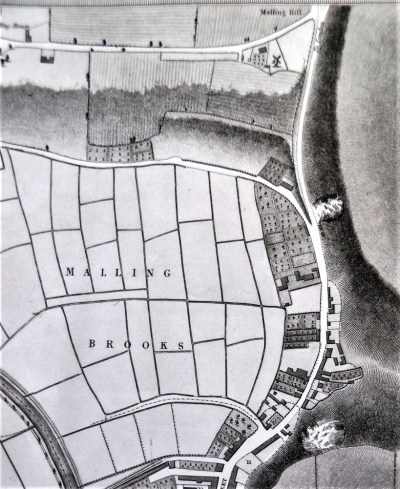 The map shows the original Lewes-London turnpike (constructed from the mid-1700s, but probably an upgrade of a much older route) running uphill to the right of the windmill. Near the top of this steep hill, which ran in a cutting as it crossed the shoulder of the Downs, a left turn led down Mill Road and Church Lane to Malling. Carrying straight on, the road re-joined the present A26 route just past the current Earwig Corner allotments. Turning right, the road led towards Ringmer via what is now the track through the nature reserve, which was the old turnpike route to Heathfield and Hurst Green.[13] 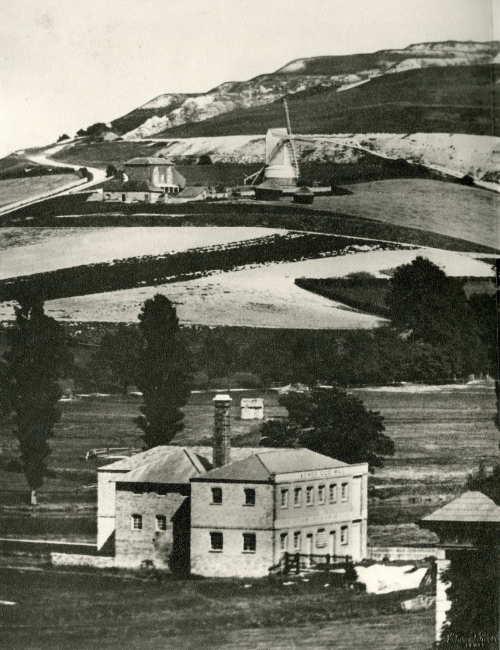 Malling from the Wallands c1860. Sussex Archaeological society. The flour mill at the Pells in the foreground was demolished in 1868

Mill Road is visible in the photograph, running west from the old Lewes-London turnpike, downhill towards Malling via Church Lane.

In 1830 the route was altered to its present course to run round (rather than over) Malling Down in order to reduce the gradient for horse-drawn vehicles. This alteration involved taking some land on the west side of the mill (from an area known as the Miller’s Slip) and compensating that loss with land acquired from the Spence family of Malling House in what was known as the Gore Field, stretching south to the new highway.[14] The Ringmer parish labour gang, armed with picks, shovels and wheelbarrows, were contracted to build it and it took them about three months.[15] The new route started where the flint wall starts on the west side of Malling Hill, where there is a short pillar with a concrete capstone and the engraved date 1830, which once read ‘Road Turnpike to avoid Malling Hill’.

Malling turnpike gate (now a bungalow at Stoneham) was one of the busiest in the Sussex network. Collecting the tolls was auctioned to contractors at regular intervals. There was no charge for using the new turnpike from Cliffe to Malling Mill, but you would have to pay if you approached from the other direction.[16]

John Smith of East Street, Lewes bought the mill with its brick residence, garden and meadow in March 1852. It was at this time that it was once again substantially re-built, almost certainly by the millwright firm of Samuel Medhurst of Lewes, who were responsible for similar work at other neighbouring mill sites.

Medhurst, the son of a miller, was born at Beddingham in 1799 and set up his millwright business in Lewes in the 1820s. The premises were in St Anne’s High Street, now Western Road. Medhurst was always interested in new ideas and techniques. He bought the rights to Cubitt’s patent sweeps, a method that allowed the miller to adjust the shutters on the sails without having to stop the mill. His two sons joined the business, but they both pre-deceased him in the late 1870s and early 1880s. Medhurst died in 1887 and is buried in St Anne’s churchyard. Another company bought the business in 1903 and, in the 1920s, the site was turned into a garage.[17]

Malling was a fine example of a post mill. The main structure was built entirely of wood. It comprised an upright centre post (an oak tree trunk), supported by two inter-locked triangular frames, resting horizontally on 4 brick piers in the roundhouse. The lower storey of the roundhouse was made of tarred brick and flint; the upper storey was walled with corrugated iron and painted white. The outside body of the mill was weather-boarded. Entry to the mill was by a door at the back, via steps from the ground.

The mill was designed to work facing into the wind and so the entire body could be rotated around the centre post. This procedure was called ‘winding’ (pronounced as in ‘window’), using a long tail-pole. The steps were raised from the ground and lowered again in their new position by a lever, known as a talthur. The steps in effect tethered the mill to the spot. The four large sails (known as ‘sweeps’ in Sussex) were shuttered.

Accidents at the mill

A long-standing miller in the later 19th Century was Richard Markwick, who worked Malling mill from around 1861 to 1887.[18] He was living next to the mill at Mill House at the time of each of the 1861, 1871 and 1881 censuses. The last miller to work the site, from around 1887, was Frank Stone, a Lewes baker, who was living at Mill House when the 1891 census was conducted. At the outbreak of war in 1914 Stone had two premises at 42 High Street and 42 Cliffe High Street and had been joined in the business by his younger son, (Frank) Leslie, born in 1888. During the First World War Leslie served as a sergeant in the Royal Sussex Regiment and won the British War, Star and Victoria medals. He was wounded and arrived back in Lewes just before Christmas 1918. He lived until 1953 and his wartime diary is in the Imperial War Museum. He appears in uniform in a Reeves photograph taken in 1917.

A fire destroyed Malling Mill on 8 September 1908. It was described as in good order in the early 1900s, although used very little and for jobs such as cutting chaff for animal feed rather than grinding corn. A gas engine had been installed around 1900. Immediately before the fire the mill was being used as a store for the laundry that had opened at the bottom of Mill Road (see below).

At 11.30 am on 8 September Mr Taylor, a corporation carter who was working nearby, saw black smoke coming from the mill. He rode on horseback to Cliffe Corner to raise the alarm, using one of the 5 new telephone alarm points, which had been installed in May that year. This was the first time the new system had been used. The Fire Brigade sent a steam fire engine (purchased by the Town Council in 1906 with the help of a loan of £350 from the Local Government Board) and a manual appliance from North Street to the scene of the fire but found ‘a furnace throughout’ with flames up to 100 feet in height. Too little water could be pumped to this elevation (about 110 feet above the river) and, after about 1000 gallons had been used, the fire was allowed to burn out.[19]

By early 1902, some years before the fire, the mill, house and land had passed into the ownership of Mr (William) Castle Leaver of Alsace House, Surrenden Road, Brighton, proprietor of the Lewes Sanitary Steam Laundry, which occupied the corner site at the bottom of Mill Road, where the flats now stand. In 1903 the laundry began a 21-year lease of the mill from Mr Leaver.

The laundry continued to make some use of the mill after the fire, mainly as a store. The Valuation Office Survey field book in December 1914 described the building as ‘a dismantled windmill. Top portion pulled down. Roofed’, with a market value of £70.

Reconstruction as a dwelling

In October 1925 Thomas Frampton Carter, managing director of the East Sussex Sanitary Steam Laundry Co., resident at Mill House, which the company owned, and later Mayor of Lewes, applied successfully to the Borough Council for permission to convert the surviving lower storey of the roundhouse into a single-storey dwelling. The work was undertaken by T. Sands, builder of 18 New Road, Lewes. It included adding an extension to the east of the building to accommodate a kitchen, scullery and toilet. The millstone became the doorstep to the bungalow.

The mill has been much photographed and sketched subsequently. 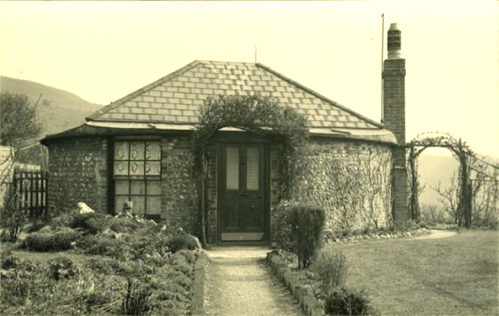 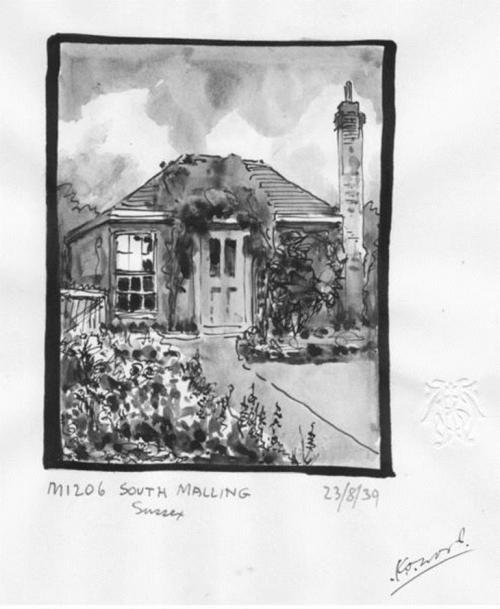 The subject of a sketch by Turner?

An archaeological buildings survey, conducted for the owners of the mill in 2014[20], suggests that the windmill in its final form stood in another location on the banks of the Ouse, where it featured in a sketch by JMW Turner c1806 (see below), and had been later moved up the hill to its current position. The survey’s author cites The Windmills of Sussex by Martin Brunnarius (1979) as the source of this information, but I can find no reference in Brunnarius’s book to a mill in the location apparently depicted, or to its having been moved. Not least because of the unpromisingly low-lying position he gave it, I’m inclined to think that Mr Turner invented this mill, for artistic effect.