This month we shall be meeting on the third Monday of the month, to avoid St Valentine’s Day on the second Monday.  Our Research Group will not be meeting in February.

The speaker at our next meeting will be Mark Perry-Nash, whose title will be “Daily Life in a Medieval Sussex Castle”. Mark is a professional, most entertaining, speaker. As usual the meeting will be held in the King’s Church Building, Brooks Road, and all are welcome. 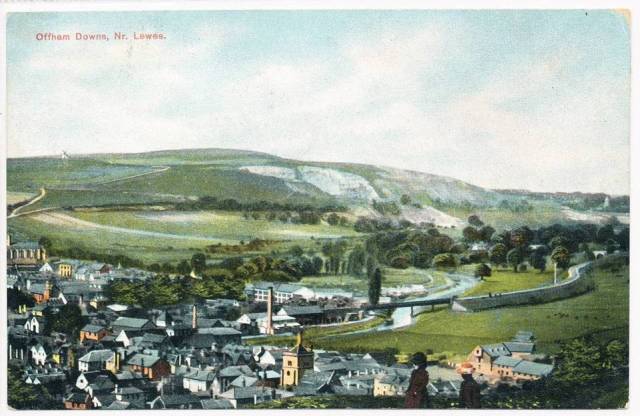 This postcard shows an Edwardian view from Cliffe Hill – with the colour added afterwards in the studio. In the foreground can be seen Cliffe church. Behind the railway from Lewes to Uckfield snakes across Malling Brooks on an embankment, crossing the Ouse near where Tesco is now. Behind the railway is the Phoenix Ironworks. Most of St John-sub-Castro church creeps in on the left edge of the picture. The fields of Landport Farm are below the rural Offham Road. Hill Road branches off from Offham Road, heading for Steere’s windmill on the skyline.

Ian McClelland has kindly agreed to chair our Monday meetings in future. Paul Myles will be deputy chair.

“There is a coach to London, leaving Lewes at 10 on Monday, Wednesday and Friday, and arriving at 5 on the alternate days. The Brighton coaches are numerous, thus maintaining an hourly communication between Lewes and the ‘Queen of Watering-places’. Offices, Leney’s, High Street, and Ticehurst’s, High Street. A coach from Brighton to Tunbridge Wells through Lewes, three times a week. A coach daily from Brighton to Hastings, Sundays excepted. A coach from Brighton to East Bourne three times a week. Further particulars would be useless to give, as the arrangements are continually varying.”

6. Grim Discovery at the Priory

“To the eastward of the [Priory] church was the common burial ground of the convent. Upwards of 100 skeletons, deposited in cists slightly made of hewn chalk-stones, were exhumed. The practice of repeated interments in the same ground seems to have been eschewed in this establishment, and hence the cemetery must have been of large extent.

Within a few feet of the eastern end of the church a most singular discovery was made. A circular pit, ten feet in diameter and eighteen feet deep, was found to be filled to above half its depth with human remains. The stench emitted from them was so great that the excavators (certainly none of the most squeamish of beings) ran away from the spot, sick and disgusted. For twenty four hours the hindmost of a train of wagons was constantly occupied with the contents of this horrible subterranean charnel-house. The bones were much crushed and broken. The number of bodies the pit had contained cannot be estimated with much precision; suffice it to say that it must have been many hundreds, and that the bones in the aggregate weighed many tons.

That the unnumbered dead thus summarily buried were the victims of the sword appears likely from the discovery in the pit of an iron spur, part of a bridle iron and a portion of a weapon. That they were among those who fell at the battle of Lewes in 1264 is equally probable.”

“The Friars is so designated from the site having originally been occupied by a monastery of Grey Friars. The history of this establishment is very obscure; the name of the founder and the extent of its possessions being alike unknown. That it existed prior to the Battle of Lewes is proved by the fact that two of the friars belonging to it were zealously engaged in the good work of composing the differences between the king and the barons. It shared the fate of all similar establishments in the reign of Henry VIII, who granted it to William Heydon and Hugh Stukely. It afterwards passed to the Keynes, and in 1631 belonged to John Shurley. From 1682 to 1803 it was possessed by the family of Pellatt, who alienated it at the latter date to Mr George Verrall. About 20 years since it was purchased by Mr N. Wimble, whose widow lately disposed of it to the Directors of the Brighton, Lewes and Hastings Railway Company. It is feared that ere long it will be pulled down to meet the exigencies of that undertaking.

This was formerly the residence of Sir Ferdinando Poole, Bart [co-founder with Lord Rosebery of the Derby]. The judges have been accommodated here during the assizes for about half a century; and it was here that King William IV and his consort were entertained on the occasion of their visit.”

This information comes from an article by Charles E. Lee published in the January 1950 edition of The Railway Magazine. For a full reference and link to the article see the Lewes bibliography available on leweshistory.org.uk.

There were once six railway lines radiating from Lewes, in date sequence: 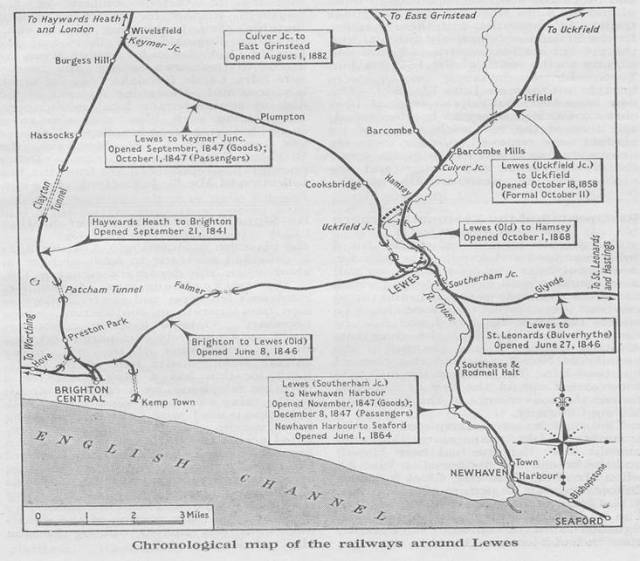 The first Railway station was in Friars Walk, with separate platforms for through trains to Hastings nearby at Pinwell. A separate halt was built below Lansdown Place, to serve Southover. This arrangement was never satisfactory, so in 1857 a new station was built at the bottom of St Mary’s Lane (Station Street) and the old stations were converted to goods traffic. 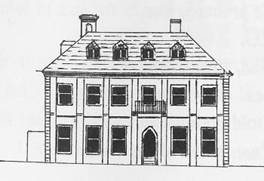 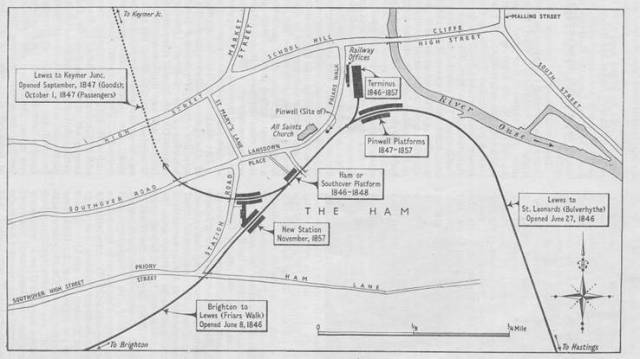 The new station itself was still inadequate, and in 1889 there was another major reorganisation. The 1857 station was completely rebuilt as the present Lewes station, and the Hastings and Uckfield lines were re-aligned. The main changes since then have been confined to changes in platform length and closures affecting the routes to Uckfield and East Grinstead, allowing the demolition of the bridge across the High Street and removal of the embankment across South Malling brooks. The railway cutting between Old Malling Farm and the Malling Estate remains. 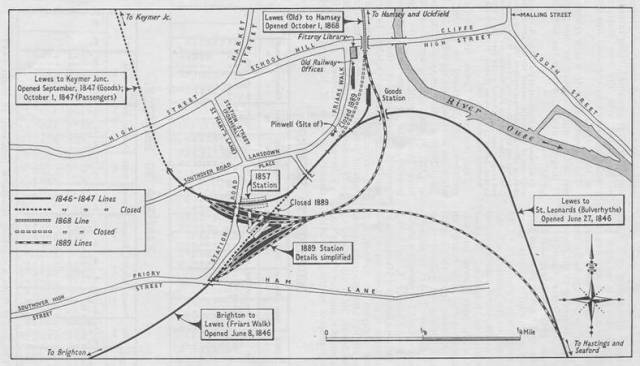