Please note: this Bulletin is being put on the website one month after publication. If you would like to receive the Bulletin as soon as it is published, please contact the Membership Secretary about joining the Lewes History Group.

Mathew Homewood         A Turbulent History of Pub Life in Lewes

For centuries the many Lewes inns and public houses were the centre of the town’s social life, including its politics, its entertainment and its bonfire. Some might argue they still are. Mathew’s talk will develop the story told last summer in John Davey’s ‘Old Inns of Lewes’ to take a closer look at what went on in some of these establishments, and the problems faced by many a landlord.

He will tell the tale of the devastating summer of 1907, when the authorities purged Lewes of 12 of its drinking establishments, and will also introduce us to the pub that never was; the Robin Hood. 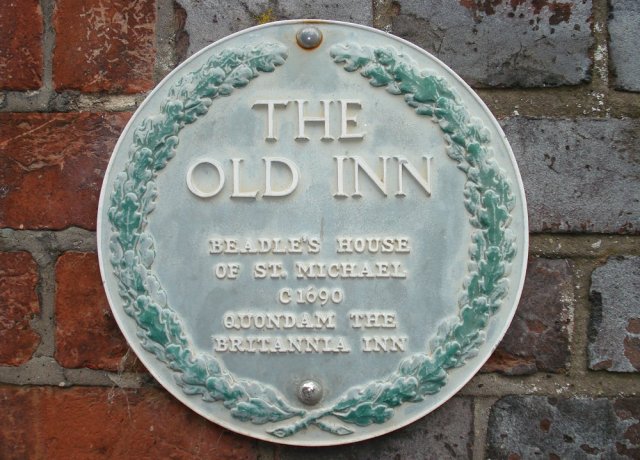 Homework prior to Mathew’s talk: where is this plaque marking the Beadle’s House of St Michael’s parish, later the Britannia Inn?

The Street Stories Project is gathering steam. Now is your chance to get involved.

Interested? If yes then do come to the Kings Church Building, Brooks Road, Lewes on Monday 1st July at 7:30pm. We will:

I note that in Bulletin no.34 the Christian name of the first headmistress of the Girls Grammar School is said to be unknown. However if you refer to page 73 of “The Schools in Lewes” by Brigid Chapman published in 2012, you will see that the name was Lilian. It also mentions on the same page that Miss Moss had become the headmistress by 1937 and, as far as I recall, stayed in that position until the 1960’s.

5.   Gravestone in the Cuilfail tunnel wall

The Lewes History Group website was contacted this month by Stephen Cook of East Sussex County Council, enquiring about a gravestone that his team, planning to clear encroaching undergrowth, had discovered. The stone is apparently set in the flint wall above Cuilfail tunnel.

I am old enough to recall the former Cliffe cemetery on Malling Street being cleared in the 1970s, prior to work being carried out to create the Cuilfail tunnel. That section of Malling Street had already seen many houses demolished to create Phoenix Causeway, providing a second river crossing, and intended to be the start of an “Inner Relief Road” that would have driven through the heart of Lewes, passing through the Paddock below the castle to emerge near the prison, with hundreds of houses being demolished to make way for it. When more sensible counsel gave us the present southern by-pass and the tunnel, there was still a major re-routing of Malling Street, with more houses and buildings demolished, as well as the removal of the cemetery to create the new wide approach to the tunnel, and provision of a new access road to Cuilfail up a ramp.

I believe that the remains from the old churchyard were re-interred elsewhere – perhaps in Malling churchyard? I don’t know what became of the gravestones that could previously be seen in the hillside. Today their inscriptions would be carefully recorded, but I’m not sure there was the same concern forty years ago. Unfortunately the Record Office at the Maltings closed at the end of May, and will not re-open until the Keep is completed, later in the year. Any members with relevant memories?

Stephen Cook sent us photographs of the stone, which appear to show the inscription as:

This looks like a footstone rather than a headstone. With access to the Cliffe burial registers, it might well be possible to identify E.T and J.T.

This postcard, showing two pairs of yoked oxen drawing a timber waggon, was mailed from Lewes to Seaford in 1904. The carter stands by the waggon, while his lad carries the long goad used to guide progress. The printed resolution is unfortunately not sufficient to read the owner’s plate on the side of the waggon. The elaborate fence behind the team is quite a work of art.

This postcard featuring cattle brazing in the Brooks upstream of Lewes is postmarked 1925. The tower of Hamsey church can just be seen in the distance.

It does no justice to Kate Fowler Tutt’s long contribution to Lewes life to remember her only as the ‘aptly- named spinster schoolmistress’ who, in 1914, famously objected to the display of Rodin’s Kiss in the Town Hall where soldiers were billeted.

In 1907, at the age of nearly 40, Kate Fowler Tutt came from Brighton to take over at Malling School, and in the Sussex Express of 1 February 1908 appealed for donations of boots to enable her pupils to attend school in wintry weather. The following year, as President of the Lewes and District Teachers Association, she inveighed against leisured women who had no understanding of the lives of poor people and were trying to gain the vote through violence rather than useful work.

In 1913 Kate Fowler Tutt became headmistress at the Central School, Southover, and urged parents to ensure uninterrupted attendance. Her interest in child welfare was shared by Greta Allen, writer on public health, and local organiser of the militant Women’s Social and Political Union, who lodged in Southover High Street. The women’s suffrage literature that Kate Fowler Tutt reportedly distributed, however, she was likely to have written herself.

In April 1916 Kate Fowler Tutt participated in the Women’s Patriotic Housekeeping Exhibition at the Brighton Municipal Training College, organised by leading Sussex members of the pre-war constitutional National Union of Women’s Suffrage Societies. She displayed ‘recycled’ garments made by her pupils, and her talk castigating ‘The Tyranny of Fashion’ was quoted in the Times.

At the end of 1918 women over 30 could vote for the first time in a General Election. In 1909 Kate Fowler Tutt had declared that the great mass of women needed to be educated to use the vote responsibly. A non-Party House of Women, elected by women, should deal with women’s and children’s matters. ‘Let each sex keep to the work it best can do.’ Instead of being forced to take on underpaid ‘sweated’ labour, married women should be able to concentrate on domestic duties, such as making chest and back warmers for their husbands out of brown paper and old woollen stockings.

Now, in November 1918, speaking on ‘Women’s Work after the War’, she advocated that all women undertake outside work. During the War privileged women had discovered what work meant. Such women must never be allowed to lapse into careless indifference. Women should prepare themselves for participation in Imperial politics. Women should make a clean sweep of representatives whose sole idea was saving rates not spending them. Those who would not progress must be dismissed. Women architects were needed to design better housing. There should be women magistrates and women’s courts to deal with women’s cases. Women must demand equal rights in all areas of life.

The following month she spoke to the Congregational Church Sisterhood, and at Parliamentary candidates’ pre-Election meetings, on the importance of women exercising their right to vote. Women must put things right. They must take an interest in politics, otherwise they were shirking their plain duty. She recommended that women did not join political parties. They would have much more independence as free lances. During the next 20 years, as the first woman Lewes Borough Councillor, and member and Chair of numerous Committees, she certainly put her own advice into practice.