Relatively few people have heard of the Home Guard ‘Auxiliary Units’ of World War II. Formed in 1940 they were to be the British Resistance, countering a German invasion by delivering guerrilla warfare tactics throughout their localized areas. Stewart started researching the Sussex Auxiliary Units in 1992. Four years later, following extensive interviews with original patrol members and many hours in the field looking for the remains of their secret hideouts, his findings were published as ‘The Secret Sussex Resistance’ The presentation will highlight his research findings and how strategically placed Lewes would have been had a German invasion taken place.

Stewart is a founder member of the Sussex Military History Society, a member of the Council for British Archaeology South-East and a long-time member the underground exploration group Subterranea Britannica.

For my own purposes I have put together a series of working indexes for the Bulletin, the main ones being Lewes people and places mentioned and the topics covered. These are ‘living documents’, continually being updated, and typically a little behind, so the most recent Bulletins may not be included. My working format does not readily lend itself to online publication, but if you would like to know whether the Bulletins make any reference to a person, place or topic near to your heart, please do email me at the address at the end of the Bulletin. While the indexes are not perfect (especially the topics index), this is probably a lot quicker and easier than ploughing through the nearly 70 issues of the Bulletin now online.

Source: ESRO P410/2, which includes a photograph of each mayor.

The following list encompasses the 40 men and 2 women who served as Mayor of Lewes during the period of the Borough of Lewes. The dates below are the years of election – the mayoral year started in the Spring.

“On Wednesday and Thursday last Lord Albemarle’s Regiment of Dragoons marched from this town to Basingstoke, etc, Hampshire; and yesterday a Troop of General Hawley’s came out of Kent to relieve them.”

Mounted troops of Dragoons were regularly rotated around army bases at home and abroad. In 18th century Sussex they were a key resource used to combat smuggling.

After the 1893 death of Lewes banker George Molineux, a partner in the Old Bank for more than 40 years, his properties in Lewes, Isfield, Ringmer & Barcombe Mills were put up for sale by auction. As befits a man whose career had included railway promotion, the advertisement featured their proximity to the railway stations at Lewes, Barcombe Mills and Isfield.

Amongst his properties was “The Far-Famed ‘Dripping Pan’ field, one of the institutions of the town of Lewes, used by the Priory Cricket Club for over half a century, with the ‘Mount Field’ and residence in the occupation of Mr Geo. Lenny, together 10 acres 0 roods and 12 perches, within 200 yards of Lewes Railway Station.”

Also sold in Lewes were another 10½ acres of ‘accommodation brookland’ nearby, adjacent to the Convent Garden and Priory Ruins, and a delightful villa residence known as ‘Woodbine Villa’ in Spences Field, Southmalling, in the occupation of Mr C.J. Berry. George Molineux had purchased the Dripping Pan, Mount Field and Convent Field in 1878. 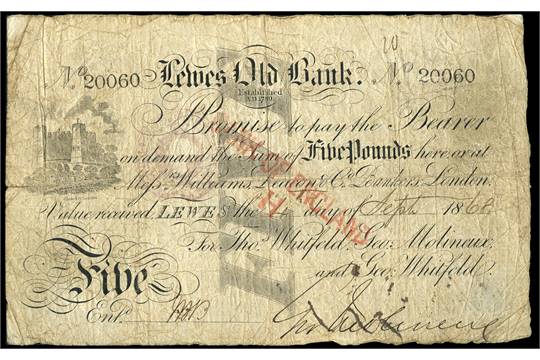 “Upon what is called Spittal Hill, about a mile west of the town, Lewes has a capital Race Course. A commodious stand was built by subscription in 1772, and recently another, upon a more extensive scale, has been erected. Races take place here on the two days following those of Brighton, under the able superintendence of J.F. Verrall, Esq, the much esteemed Clerk of the Course and Manager, and excellent sport is afforded.”

Source: Alderman Henry Martin, ‘The History of Brighton and Environs from the earliest known period to the present time’ (1871) p.206

“Lewes Officer’s Death: Popular Motor Engineer. Lieutenant H. Newham, RASC, is reported to have died of wounds received on active service in the Middle East, at the age of 42.

Lieutenant Newham was the popular manager of the Lewes branch of Messrs Mansfields, motor engineers, for the past 18 years and was a member of the South Saxon Lodge of Freemasons. He served in France in the last war, having joined at the early age of 16 years. His knowledge of motor engineering and his realisation of the urgent need of skilled soldiers prompted him to offer his services in the Officers’ Reserve, and on the outbreak of hostilities he undertook active service overseas.He was an enthusiastic yachtsman and within a few days of taking his commission in the RASC volunteered to help in the evacuation of Dunkirk and St Valerie. His boat, one of many little boats that went to St Valerie, managed to rescue 16 wounded French soldiers. Those who knew him will extend their sympathy to Mrs M. Newham, his wife, who is well known as an organiser and voluntary worker, and who has taken a large share in the civil defence of the town.”

The Depot, a new independent cinema, will open in Lewes in early 2017. While waiting for it to be built, a group of local film makers and others interested in local history have formed Reel Lewes, to investigate and celebrate cinema-going of the past in Lewes. We will make a film and gather interviews and resources for an exhibition, ready for the Depot opening.

If you, or anyone you know, remember these cinemas in any way, it would help us very much if you got in touch, just for an informal chat to start with, maybe an interview later: