House Historian, Rosalind Chislett looks at the architectural history and the development of houses in Sussex. She will also explore the ways to investigate the history of your property, when it was built, by whom, the names of the people that occupied it over time and the house’s link to the local community. Rosalind has co-written a book entitled ‘Living in History’ which explains the evolution of English house styles. See http://www.house-historians.co.uk/ for more detailed information. 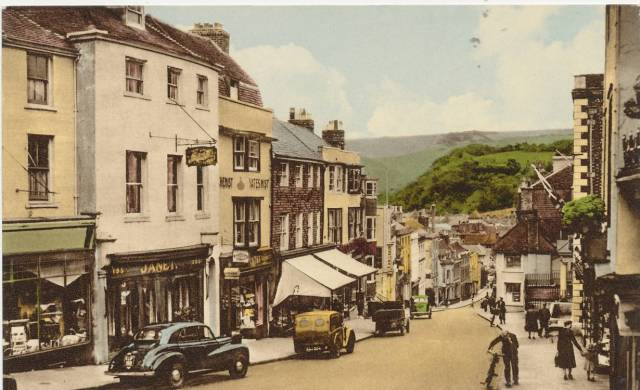 This 1950s Shoesmith & Etheridge Norman series postcard shows a Lewes in which the motor car is just beginning to become a more prominent feature in the townscape.

The 19 January 1881 Sussex Express carries a long account of the wedding of Rhoda Currey, second daughter of Edmund Charles Currey esquire of Malling Deanery, to Robert Marmaduke Rosseter. He was at that time a new curate at Grantham in Lincolnshire, but he was the second son of the late Rev Robert Grafton Rosseter of Iford Manor, and the grandson of James Marmaduke Rosseter, a wealthy City of London man. The bridegroom’s widowed mother was the niece and heiress of Henry Hurly, a partner in the Lewes Old Bank, and still lived at Iford, which was part of her inheritance.

Unfortunately the day before the January wedding there was a great snowstorm. Malling Deanery was buried under tons of snow, and there was no way carriages could get anywhere near the house. Every available man was called on to help, and one party soon cleared a short path from the Deanery to South Malling church. Two other groups cleared footpaths through the snow, one across Mr Currey’s private bridge and up past the Pells to St John-sub-Castro and the other along Church Lane to Malling Hill, so that the tougher guests could make it through on foot. However, the service was due to be conducted by the bride’s uncle, a Lincolnshire clergyman, who had planned to arrive by train. He did eventually struggle through via Portsmouth, arriving before the end of the service, but not before the bride’s brother-in-law, who was the chaplain at Lewes Prison, had been drafted in to replace him. He was assisted by the men of the church choir, which had been created by the bride.

Some of the appointed bridesmaids were already at Malling Deanery – they were the bride’s sisters. Two more were the bridegroom’s sister’s, stranded out at Iford. His mother decided the journey was impossible, but her daughters were made of sterner stuff. They arranged for a farm waggon to be filled with straw, in which they huddled down and were drawn to South Malling by a team of horses, with a man assisting each horse. As the roads were impassable, they had had to navigate cross-country over snow-covered fields. They missed the bridal procession, but they too made it before the end of the service. One last bridesmaid was missing – Miss Clara Whitfeld, daughter of banker George Whitfeld, isolated in the family home at Hamsey.

The wedding breakfast was to be at the Deanery, but had been ordered from fashionable caterers based in Western Road, Brighton. As both the road and the railway were out of action, the kitchen staff at Malling Deanery had to improvise with what they had in stock, or could carry in from the town. However, the heroic catering staff did manage to get the wedding cake through in the nick of time, while the bride’s bouquet made it with a minute to spare before her procession set off for the church. After the wedding breakfast the bride and groom had to set off on foot, as far as St John-sub-Castro where a carriage was waiting to transport them to the station. The London trains were now running again, to whisk them off on their honeymoon. They did later return to the Lewes area, when Rev Robert Rosseter was rector of Rodmell from 1891 to 1897. Rhoda Rosseter died at Horsham in 1905 and her husband in 1915, shortly after being appointed vicar of Ringmer.

Source: a scrapbook kept by the bridegroom’s mother, which includes the newspaper cutting [ESRO AMS 5385/1].

“To the Ladies of Lewes and its environs, real bargains in Haberdashery and Millinery.

The large and valuable stock in trade of Miss Sarah Harben, School-hill, Lewes, milliner, is now selling off very much under prime cost, consisting of black and blond laces, thread edgings, muslins, cambricks, silk and cotton stockings, gloves, shawls, perfumery, threads, tapes, needles, bonnets, fur tippets, etc. The lowest price is fixed on each article, from which no abatement can be made. NB: All persons who are indebted to the estate of the said Miss Harben are requested to pay their respective accounts immediately, into the hands of Mr Banister Flight, one of her trustees, or to Mr Dicker of the Old Bank, Lewes, who is duly authorised to receive the same.”                               Source: An advertisement, from the 30 December 1793 Sussex Advertiser

These two postcards both show much the same view of Malling Street and were taken only a few years apart. The first card with the handwritten caption is by James Cheetham – Bob Cairns has a postcard with the same image and Cheetham’s name printed on the reverse. It appears to date from early in the Edwardian era. The row of cottages on the right appear uniform in design, except that the penultimate cottage has a shop window. 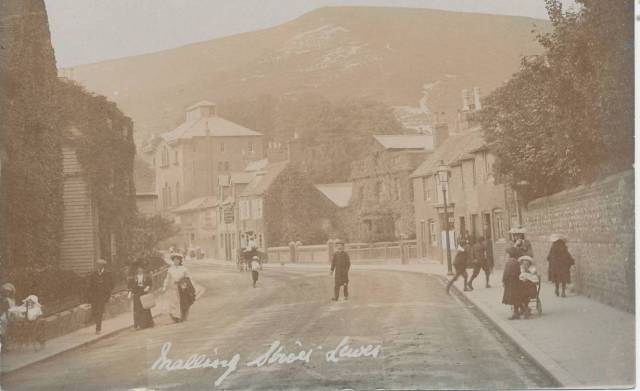 The second hand-coloured card was published by A.H. Homewood of Burgess Hill. It was posted in 1910 by someone who had just moved into a house across the road from the lamp post – “a nice house but dreadfully dirty”. The shop in the row of cottages has grown an extra storey, a then-modern intrusion into a row of vernacular cottages. 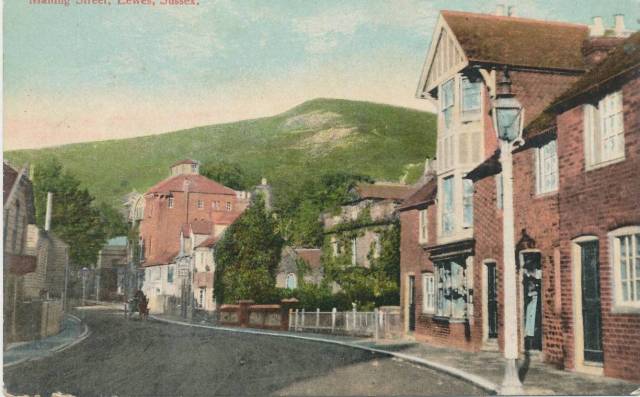 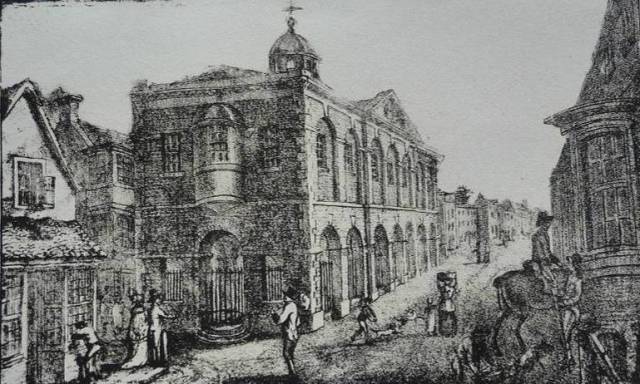 This is another early 19th century James Rouse lithograph, this time in black and white, and featuring the Old Town Hall or Sessions House, demolished in 1810. It is hard today to imagine that there was ever enough room for this substantial building in the middle of the High Street. The entrance of St Mary’s Lane (now Station Street) can be glimpsed to the left, while the man on the right is riding into Fisher Street. This lithograph was offered for sale on ebay in April.

Thomas Walker Horsfield’s ‘History and Antiquities of Lewes’ (1824) tells us that this building was erected, on the site of a predecessor, in 1761. Paul Dunvan, in his 1790 ‘History of Lewes and Brighthelmston’ describes it as “a perfect nuisance on account of its very improper situation and a monument to the stupidity of those who fixed it there.”