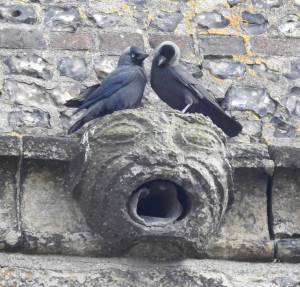 Kevin has a lifelong interest in Sussex history, and has several books published on Eastbourne and Seaford history.  He leads regular guided tours of Lewes, chairs the Alfriston History Society, is a trustee of Seaford Museum and was until recently was an accredited guide to the Houses of Parliament.

He particularly interested in churches and graveyards and this well-illustrated talk is an A-Z of church features and customs. The illustration shows two jackdaws contemplating a gargoyle at St Thomas, Cliffe – probably not an ideal nesting site in wet weather.

This copperplate print of the Saxon St John-sub-Castro church, Lewes, is taken from Francis Grose, ‘The Antiquities of England & Wales’ (vol.IV), published in London in 1776 by S. Hooper.

It shows the original church, the site of which is still evident in St John-sub-Castro churchyard, and which was at that time by some margin the oldest surviving Lewes church. The remains of its chancel can be seen at its eastern end, and the nave formerly had a higher roof. It had several features suggestive of a Saxon origin.

Lot 304 in Gorringe’s weekly sale on Monday 4 June comprised two engravings by James H. Hurdis illustrating the scene when a dinner was given to 3,900 poor Lewes people to celebrate Queen Victoria’s coronation. The lot was offered at an estimated price of £80-£120. The engravings show tables laid out in massed ranks on the cricket field called the Dripping Pan in the Mountfield, Southover, while the families of the local gentry (described as ‘the inhabitants of Lewes’) who had sponsored the event gathered to watch the proceedings. Copies of the etchings were published by the Lewes stationer and bookseller Reuben W. Lower. The same scene is shown in a print attributed to John Henry Hurdis added to the British Museum collection in 1978.

The coronation took place on 28 June 1838, and the events of the day are described in detail in the Lewes Town Book. The town was wakened early by the peal of Old Gabriel and the bells of the parish churches. Work was set aside for the day. The central table was 100 yards long and had 68 side tables, each 42 feet long, on either side. There were 232 joints of beef, veal, lamb, pork and ham, in all a pound of meat for each participant, plus vegetables. To follow were 414 ‘plumb puddings’, the largest of which weighed 58 lbs. The meat was carved by 204 gentlemen and respectable tradesmen, with 408 of their sons and daughters acting as waiters. All the town breweries provided hogsheads of beer. There were processions, bands, trumpets to announce Grace, cannon and sports. Naturally in Lewes, the evening concluded with fireworks.

The development of Wallands Park began slowly in the mid-Victorian era but the very large Victorian semi-detached and detached villas of Wallands Crescent seem to have developed somewhat earlier. They have a spectacular position on the edge of the hill overlooking the Ouse Valley but because they form a small cul-de-sac you could easily be unaware of them, unless you had cause to visit the care home Claydon House at 8 Wallands Crescent.

In the 1871 census the heads of the households of 1-8 ‘Wallands Terrace’ are clearly identified.

1 Wallands Terrace: William Spencer Edwards, aged 53, dissenting minister, born in Bath. He was the minister of Tabernacle from 1868 to 1875.

3 Wallands Terrace: Charles Alfred Woolley, 40, a solicitor born in London. His wife was a native of Lewes, and his children aged 6 and 5 were both given the third Christian name Gell, so we can guess which legal practice he belonged to. He had married Louisa Gell, daughter of Lewes solicitor and coroner Francis Harding Gell, at All Saints church in 1858. Their five year old had been born in Lewes, but the elder child was born in Australia.

5 Wallands Terrace: Edward Chatfield, aged 56, timber merchant and the only head of household in the Crescent who had been born in Lewes. He had a number of other occupations, most notably ship builder [see Bulletins nos. 87, 88 & 94].

After leaving Wallands Terrace (a surprising early name variant, as the houses are well spaced out with large grounds) the census enumerator for St John-sub-Castro parish found an artist in residence at Landport Cottage, and then just three houses in Wallands Park. One of these was still under construction, and the other two were occupied by the households of ironmonger Thomas Attwood, 55, another Lewes native, and ironfounder and engineer John Every, aged 51 and from Portsmouth. He then had quite a walk to record Robert Harvey Ellman, 53, a farmer of 1,100 acres, at Landport Farm and some of his labourers in the nearby cottages.

This postcard featuring Lewes Town Hall was published by F.H. Smith of 8 & 9 Station Street, just round the corner. This particular postcard carries a 1908 postmark. 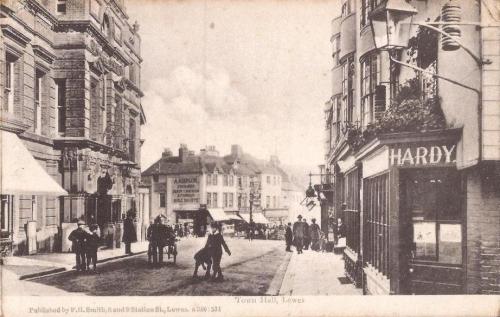 This 1964 photograph of Eastgate Street, provided by Mr E. Cocham of Hamsey Crescent, was reproduced in the 27 Jul 1990 Sussex Express. The cottages shown were demolished just a few years later to make way for Phoenix Causeway. Only the last building still survives, but the tree just visible above the gables in the distance is the horse chestnut that still survives outside Waitrose. 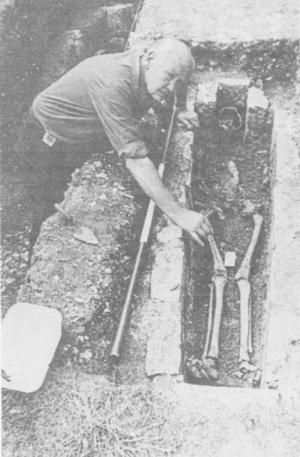 Researching the history of your family or locality can be fascinating, but unless the results are made available to others, either by formal publication or deposition in an appropriate repository such as The Keep, it is of only personal value. Recording for others is particularly important in archaeology, where the research process involves the destruction of what is studied. The three-day studies of Time Team are certainly entertaining, but one trusts that the excitement of new discoveries is followed by due academic process. A typical modern excavation lasts perhaps just a matter of a few days or weeks, but its interpretation requires many months of expensive post-excavation study by experts.

One sad local example was the extensive excavations at Lewes Priory carried out between 1969 and 1982 by the late Richard Lewis. The excavation itself seems to have been perfectly competent and quite successful. Thousands of bags and boxes of material were collected. Thirty two skeletons were excavated from the infirmary chapel. A six volume day-to-day site diary was maintained, plans and sections were drawn and an archive of 2,000 slides and photographs recorded the work’s progress.

Sadly Richard Lewis’s enthusiasm for excavation was not matched by his focus on the post-excavation and publication process. The bags and boxes of excavated finds remained stored in his house until his death, by which time many of them had lost their labels. Twenty nine of the skeletons were stored on his lawn, in cardboard and wooden boxes covered by a tarpaulin. By the time they saw light again the boxes had been almost entirely consumed by slugs, snails and woodlice. There was evidence that some had been gnawed by rodents, and all the bones had collapsed into a heap. Two smooth snakes had made their home in one of the skulls. It took a further decade and over £20,000 before a report was finally published by a team directed by Malcolm Lyne.