Baldy was living during the period when the idea of the “picturesque” was beginning to influence the design of gardens. There was a move away from the idea of garden “rooms” of the past with formal knot gardens surrounded by box hedging to gardens that incorporated the designer’s idea of a wild landscape with trees, grottos, crumbling ruins and vistas between the plantings as well as much wider views over the local landscape.

1746 (John Farrant, SAC 134). Although paintings exist of Lewes from the gardens, sadly there are no paintings of the gardens themselves. The painting of Lewes from Cliffe Hill by Samuel Hieronymus Grimm opposite shows a small part of the garden with shrubs and rough grass (lawn). Regency lawns were cut by hand with a scythe so the grass was much longer than we would nowadays consider appropriate for a lawn.

Thomas Woollgar (1761-1821) wrote a long note on Baldy’s garden in the second volume of his history of Lewes (see Appendix for the full version). He says, “The greatest curiosity of this Vill is a kind of hanging garden the admiration of all who view it.” “This charming place of amusement” as he calls it later. He goes on to describe the access by gradual ascent to the Gate of the Garden via the steep hill to the village of Glynde – clearly a description of Chapel Hill. There is some debate about the position of the entrance gate. It could have been between No. 20 and the “I will give you rest” seat or it could have been a few yards further up the hill. A route can still be seen on the map of 1873 with what looks like a small building at the entrance.

Colin Brent summarises Woolgar’s description, saying; “Thomas Baldy (c1711-82) adorned the ‘delectable eminence’ on the chalk bluff above his china-shop with shrubs and trees, beehives and winding walks. Watercolours of Sussex castles hung in the summer house, and seats in sheltered alcoves commanded vistas of the High Street, the Lewes Downs, the Weald, and the water-meadows along the Ouse, peopled in due season with haymakers, duck shooters and skaters.” (Colin Brent, Georgian Lewes p119).

There were 2 sisters, Philadelphia (b. 1725) and Charlotte Lund (b. 1733), whose father was the rector of St Thomas in the mid-18th century. They briefly ran a girls’ boarding school together in Lewes. It was probably Philadelphia who wrote these patriotic verses in 1746. The opening lines of her verses start;

“Blest be the man who first contriv’d this seat,
Where nature’s beauties in bright prospect meet.
Where’er I turn, the landscape charms my eyes!
What vallies sink! What hills around me rise!”

“What unmixed pleasures in my bosom rise,
As Lewes in my view extended lies!
For situation and delightful air
She with the proudest cities may compare.
The fields around with verdure glow,
And Ouse slides gently in the vale below.
Indulgent heaven for ever guard her peace,
Revive her commerce and her wealth increase.
O’er her may virtue rule with gentle sway
And odious vice detest’d fly away.”

(Thanks to John Bleach for providing information about these two poems, published in the Gentleman’s Magazine Vol . 17 of 1747 and the West County Magazine IV of 1790 respectively) 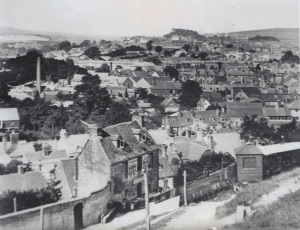 When Thomas Baldy died in 1782, the gardens were inherited by his business partner, John Lambert, who in turn left them to his son, James Lambert Junior, who left them to a cousin, George Hoey, who also lived on Chapel Hill. Records exist which state that as late as 1846, a century after Thomas Baldy opened the gardens, it was still possible to visit them by paying a gratuity. The photo opposite shows the probable entrance to the gardens in the early 20th century. However the Coach House and the big house it served were built in the late 19th century and so the gardens must have disappeared, though even now there is a reminder in the form of the eco-house, Baldy’s Garden, on Cuilfail. It is thought that some remnants of the steps, pathways and terraces still remain though overgrown in the garden of Dimension III directly above Lamb House.

“Notwithstanding the low situation and Moory Soil of this town of the Cliffe some of the principal Inhabitants have raised neat and usefull gardens adjoining to their houses which are well secured from the inundations of the River: but the greatest curiosity in this Vill is a kind of hanging garden the admiration of all who view it: the proprietor of which is Mr Thomas Baldy, who keeps a considerable Glass and China Warehouse in the front of the West Street. He is a very courteous person and a virtuoso in various researches tho’ not a Bigot to any one particular attachment and he is ever ready to indulge strangers with the inspection of this delectable eminence, the improvement and disposition of which is entirely the Work of his own hands.

This delightful spot of ground projects beyond the verge of the Cliffe over the road way from Lewes upon a steep hill to the village of Glynde behind the South Street of the Cliffe, the access to which is by gradual ascent raised by the proprietor to the Gate of the Garden which when entered is found to be laid out in as elegant a Taste as the Situation Soil so would permit and evidently denotes great pains and judgment bestowed upon it. Here are pleasant winding walks Trees and Evergreens of various kinds Flowers of various species and some of them flourish even in Winter when others of the same kind are dead in the Gardens of other persons. Here is likewise an Arbour well sheltered from the heat of the Sun, a Beehouse in which are three columns of Bees well secured from the inclemency of the weather, Alcoves and different Seats for various prospects, a pretty Summer house ornamented with views of the several Priories and Castles of the County and other parts of England, there has also been a late addition of a Lawn: All the formation of the Proprietor’s head and hands. From this Lawn may be taken a full view of Lewes & the North and North West part of the County to the Weald.

From this Garden is a most pleasant tho’ bounded prospect, but not so limited but that the eye can receive entire satisfaction from its extended Contents. For from every part of this height may be taken a full view of the Cliffe as well as of Lewes with the river in the vale below the Borough of Southover and the parts adjacent all which it overlooks and particularly from one of the Seats and openings is a clear prospect through the West Street of the Cliff over the Bridge up School Hill and the high Street of the Borough of Lewes to the West Gate on to the Spital Mills and Race course beyond the Town and to the South and South West and by West of all the Villages upon the Banks of the River Ouse even to Newhaven as likewise the villages of Falmer Kingston and Stanmer the seat of Thomas Pelham Esq Knight of the Shire for the County of Sussex and on the North and North West over the Level of the Weald and to the seats of several persons of distinction such as Coneyburroughs the seat of Madam Elizabeth Medley a widow lady of Great Fortune merit and distinction in this part of the County and sundry other Mansion houses belonging to the Gentry in these parts but a prospect to the East is forbid by the height of the Cliff under whose brow this charming place of amusement is situate from whence likewise in the Summer season the Eye is entertained by the sight of numerous mowers who cut the Grass in the Brooklands and Meadows and of the reapers who gather the Corn on the higher ground, and in Winter when the Brookland and levels are overflown in a clear day the scene represents a perspective of a Lake or small Sea with little Islands in the mid of which are rising grounds are called The Ries and in Frosty weather may besides the glassy surface be seen Skaiters on the Ice and Gunners after the wild fowl with other such objects of diversion and even in the season of Winter the reflecting mind may enjoy the pleasure of private contemplation in the Cot or Summer house where among other cogitations he may meditate and justly admire the industry labour and capacity & activity of the ingenious contriver of such an elegant source of entertainment and delight all of his own handywork.

Mr Baldy has likewise made an attempt to form a large Grotto just under the Cliff at the back part of his warehouse and Garden, adjoining to his dwelling house, but whether thro’ want of sufficient materials for the purpose or by reason of the too great labour it may require at his time of life the completion is not preserved in.”