The defence of Lewes

With the outbreak of war in 1939 Lewes, because of the strategic importance of its road and rail bridges over the Ouse, was designated a ‘Type A. Nodal Point’, which meant that the town was deemed capable of holding out against enemy attack for six days. In the event of invasion the whole of the borough would be defended, with the exception of two areas, one of which was ‘the new houses at Malling Hill, Malling Villas and Mill Road’. This was defined as a ‘clearance area’, whose residents would be evacuated and brought into Lewes, so as to allow the town’s defenders a clear line of fire.

In response to the threat of imminent invasion, a roadblock was established in 1940 across the main highway at the junction with Mill Road. It was manned by Local Defence Volunteers, later known as the Home Guard. A Home Guard platoon of 40 men, part of A Company, 16th Battalion Sussex HG, had its HQ at Grey House, which stood until 1965 on the opposite side of the road to the Prince of Wales pub in Malling Street.[48] All traffic had to stop at the road block and travellers were required to produce ID cards. They were to be refused entry to the town unless they were a resident of the restricted area or could show a genuine reason to enter.

The road block was at first constructed of old carts, lorries and trailers, arranged to form a chicane. More substantial obstacles – concrete cubes, anti-tank coffins and buoys – supplemented by a flame fougasse, were substituted later.[49]

Anti-tank coffins comprised a 5 feet square-based pyramid, 3 feet high at the front, tapering down to 18 inches at the back.

Buoys were concrete cones with rounded bottoms, about 2 feet 9 inches high, and with a 2 inch diameter hole through the axis.

The flame fougasse was developed by the Petroleum Warfare Department as an anti-tank weapon during the invasion crisis of 1940. It was a type of mine, which used an explosive charge to project burning liquid onto a target. It had to be positioned where the road was banked at the side so that any vehicle it disabled would block the way forward for others following. The fougasse comprised a 40-gallon steel drum filled with petrol and waste oil, fitted with an explosive battery-operated igniter charge, which was fired from a nearby slit trench. The drum (2 feet wide and 3 feet high) was buried in the roadside bank and a 4 inch drain pipe allowed the oil to pour rapidly onto the road.[50] 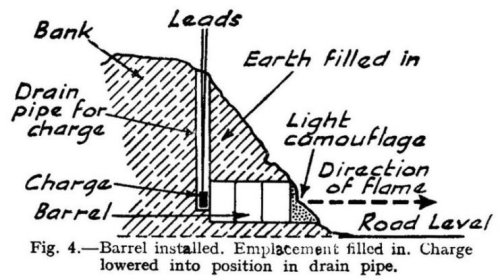 It seems likely that the fougasse at Mill Road was contained in the bank on the left hand side of the road approaching Lewes, below the houses in Malling Hill.

The flame fougasse was designed to be a formidable weapon. The fireball generated by the explosion would cover an area of up to 50 square yards. The heat of the flames was beyond intense: anyone caught in the torrent of fire would perish within seconds. 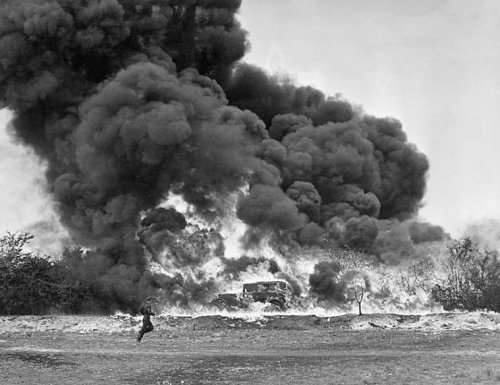 A demonstration of Fougasse, c1940. A car is surrounded in flames and a huge cloud of smoke[51]

Two pioneer companies and one battalion from 1 Canadian Division, deployed to the UK for coastal defence duties, were stationed in Lewes following the fall of France in June 1940. A further Division arrived in East Sussex in July 1941, many of whom took part in the ill-fated Dieppe Raid in August 1942. Canadian troops remained in the area for the duration of the war until D Day. Because of wartime secrecy there is only fragmentary information remaining about the exact locations of the troops. Canadians were certainly stationed on Malling Down for long periods up to June 1944. Many of them frequented the Prince of Wales on Malling Street (now Horsman solicitors), often going there on foot via a path they referred to as “The Burma Road”.[52]

Firing ranges were set up all over the South Downs. Malling Down was fenced off with barbed wire and red triangular signs appeared: No Entry Military Area. Various incidents were recorded in the local press. Firing from the Golf Course in Lewes in 1943 injured a man working on his roof in Bishopstone. In January 1945 a 3-inch calibre artillery shell was found on the roadside 50 yards north of the Prince of Wales pub. On 4 August 1944 John Trigwell of Ringmer, aged 12, was killed while playing at Bridgwick Chalkpit. He had found the nose-cap of an artillery shell and threw it against a piece of concrete. The explosion killed him but his brother, who was unhurt, ran home to raise the alarm. John had apparently been warned only the day before about the danger of playing with thunder flashes.

One of Lewes’s 18 Air Raid Protection (ARP) wardens’ posts was established by the side of Malling Laundry in 1939. At first it was housed in an allotment shed. In 1941, a brick and concrete building was constructed in the bank by the south side of the by then burnt out laundry. The post was manned whenever the air raid sirens sounded. It was equipped with first aid kits, rattles, hand-bells and whistles.

Several British Concrete Federation (BCF) communal air raid shelters, each with seating accommodation for 50 people, were erected in the South Malling area: on the green at the front of Mill House; at the top of Mill Road; and at the rear of Malling Hill Villas. A typical shelter of this sort was 7’6” high x 11’ wide x 30’ long. They were half-buried below ground, the excavated soil forming a protective bank on the sides and roof, which was waterproofed with asphalt. Five concrete steps led past brick flank walls to the entrance door, which had a gas curtain. The inside was fitted with wooden slatted seats on each side and the floor was paved. A battery provided lighting. There were two chemical toilet cubicles made of asbestos sheets. An escape ladder led to a ventilation shaft with a drain cover.

Several children were billeted in Mill Road (see the section on Houses 2 to 32). Lewes had been designated a safe area for evacuation in 1938 and in January 1939 households willing to take them were asked to register. Captain R. B. Newson was appointed Billeting Officer and Miss E. W. Foster his honorary assistant.[53]

Lewes was the destination for a large number of evacuees from London. The Council paid the host families a boarding allowance of 10/6 (53 pence) a week per child, reimbursed by central government. The first group arrived in Lewes by train from Croydon, Bermondsey and Tooting on 1 September 1939. They were taken to a number of control centres in the town and then walked to their host families. It was a large party, comprising 511 school children with 60 teachers; 360 children under school age with 233 mothers; and 160 blind adults and children. Over the next three days a further 300 or so young children with their mothers, 158 school children and 30 teachers arrived. Another 450 children were evacuated to Lewes in 1940. Around 300 boys from Tooting Bec School, previously evacuated to Chailey, were brought into Lewes in October 1939, placing a good deal of strain on the available accommodation. They remained until December 1943, when they returned to London, to be confronted with the onset of V1 and V2 rocket attacks.

Some children remained with the same family throughout their stay; others moved several times from host to host. I understand that several evacuee children remained in Lewes after the war, married here and stayed for considerable periods. However, I have been unable to speak to anyone with direct knowledge of who they were or where they lived.

[50] Diagram from War History on line