Mick Symes was one of the founders, and is now the mainstay, of the very successful ‘Lewes Past’ Facebook webpage that enables interested people to share and exchange stories and pictures about the history of the town. Over the few years that it has been running it has unearthed a huge archive of images, many of them seen previously only by the families that created them, who are often no longer based in our area.

‘Lewes Past’ is a membership group, to minimise the more unwelcome aspects of social media, but it is not difficult to join. Mick will talk briefly about his experiences founding and managing the group and then I will show a selection of the more remarkable images from its archive. Some, like the one below posted by Mick, are of a Lewes you may remember. Others go back over a century.

William Burgess amassed a collection of thousands of Sussex postcards, but after his death they were auctioned in lots by Wallis & Wallis on 7 January 1986. The postcards were sorted into batches of about 30 by the towns and villages they featured. There were over 50 lots of Lewes postcards, mostly carefully mounted individually on cardboard file cards with added notes by Burgess. The auction was very well attended and prices were high – I was there myself and purchased a couple of village lots.

Also present was an eminent Sussex Downsman and Lewes resident, the late Paul Millmore, who purchased lot 255, a batch of postcards featuring downland views around the edge of Lewes. His widow Bridget has now given the postcards to the Lewes History Group, along with a well thumbed copy of the auction catalogue. They will be deposited at The Keep.

This postcard, published by A.H. Homewood of Burgess Hill and postmarked in 1913 is titled ‘Lewes, from the Brighton Road’. I find it quite difficult to place where it was taken from – presumably looking over to the south from the Brighton Road as you approach the Prison, looking up towards Juggs Road?

This postcard has a 1912 postmark but the image is older, as Malling Mill had burnt down in 1905. It shows the original line of Spences Lane and the Grey House and its land, and the scar of the old turnpike route across Malling Down, before the 1830 diversion round the hill via Earwig Corner.

The title deeds of the Brewers Arms, 91 High Street, show that there has been a pub of that name at this location since the property was purchased in 1769 by Obediah Elliott of Lewes, a brewer who owned the Fisher Street brewery. Obediah Elliott already held a lease of the property but his lease was coming to an end. There was a public house at this site, next to the old Bull Inn for at least 40 years before Obediah Elliott’s purchase, but it was known as the Red Lion in 1727 & 1733 and as the Ship in 1744 and 1769.

After Obediah Elliott’s death in 1775 the Brewers Arms passed through a number of hands until in 1837 it was acquired by William Verrall’s Southover Brewery, and became part of that brewery’s chain of tied public houses. In 1897 Verrall’s brewery and its public houses were sold to the Page & Overton brewery of Croydon.

The front part of the Brewers Arms was replaced by the present structure in 1905 by Page & Overton. The 11 Nov 1905 Sussex Express reports the submission of plans by the brewery to pull down the old house, and rebuild it at a cost of over £1,000. The rear section, including a club room, survived until 1922, when that too was rebuilt.

The Brewers Arms building as it was before the 1905 rebuilding can be glimpsed in the photograph taken in the aftermath of the 1904 Dusart’s fire, reproduced in Bulletin no.48, or in plate 8 of Colin Brent & William Rector’s ‘Victorian Lewes’

Philip Currey (1851-1894) was the son of ecclesiastical lawyer Edmund Charles Currey (1823-1904) who came to Lewes in 1857 to join a School Hill legal practice to replace the retiring John Hoper junior. Edmund Currey purchased Malling Deanery when he came to Lewes and the family usually lived there, although the 1891 census finds them instead at Castlegate House.

Edmund Currey’s brother was Henry Currey FRIBA, a leading architect who is today best known for St Thomas’s Hospital, on the south bank of the Thames. He was also responsible for the design of the Lewes Union Workhouse, built in 1867-8, while Philip was still in his teens. This may have been his inspiration.

Philip’s first major commission was the 1873 restoration of South Malling church, just across the lane from his family home, in which the west gallery inserted in 1836 by James Berry was removed. It may have helped Philip get this contract that his father provided most of the necessary funds, and was also the registrar for Lewes archdeaconry, through whom the necessary faculties had to be obtained.

This led to subsequent work on several other church restorations in the Lewes archdeaconry, including those at Cliffe (1877), Lewes St Michael (1877-8), Piddinghoe (1882-4), St John-sub-Castro (1883-4) and Tarring Neville (1893). He also designed the obelisk in St John-sub-Castro churchyard erected in 1877 in memory of the Finnish-Russian soldiers who died in Lewes while detained as prisoners of war in the North Street prison. This work was commissioned by the Russian government.

Philip Currey’s death on 10 March 1894 at the age of 42 is recorded in the Sussex Express, which notes that he had been residing with his father because of failing health. He is remembered on his parents’ memorial in South Malling churchyard.

The 12 August 1927 Sussex Express reported that the Executive Committee of the Lewes Division Labour Party had passed a motion expressing their indignation at the East Sussex County Council proposals that they should extend their County Hall premises (then on the High Street in the building now occupied by the Law Courts) by erecting new offices nearby, within the under-used precincts of Lewes Castle. It was reported in the following week that a petition against the proposal had attracted many signatures. The dispute rumbled on through the autumn, and even as late as November the County Council had not abandoned their plans, despite what the newspaper described as ‘universal condemnation’. 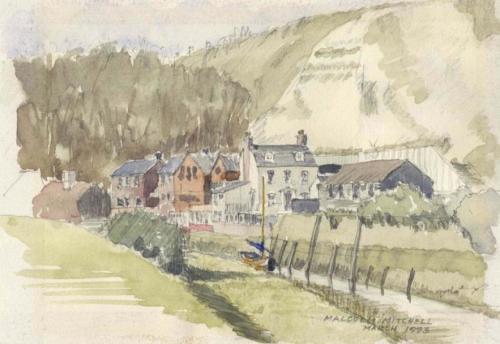 This rather pleasing 1993 watercolour by Malcolm Mitchell shows the South Street entrance to Lewes in the days when Wharf House formed an attractive entry feature to the town. It was offered for sale online by the British Art Company.