In the second of its online Autumn lectures, Lewes History Group welcomes David Scott Cowan who will talk about his grandfather, Rowland Hawke Halls (1879-1919).

Hawke Halls was a Lewes architect working in the Arts and Crafts tradition in the early years of the 20th century. He worked closely with local craftsmen on both the interior and exterior of his buildings. He was a farmer’s son who studied at the Lewes School of Science and Art, and established a practice based in the Seveirg Building, now replaced by Boots.

His work includes several houses in The Avenue, including one called Rowlands where he lived. He also designed houses in Seaford (to which he moved in 1914) and Rottingdean. His public buildings included the Fisher Street offices for the Borough of Lewes built in 1914 and St John-sub-Castro church hall in the Pells.

In WW1, Hawkes Hall served in France in the Royal Army Service Corps from 1916-1918, but was killed in a motorcycle accident shortly after being demobilised.

An exhibition of his work was shown in Lewes Town Hall in 2019, marking the centenary of his death. 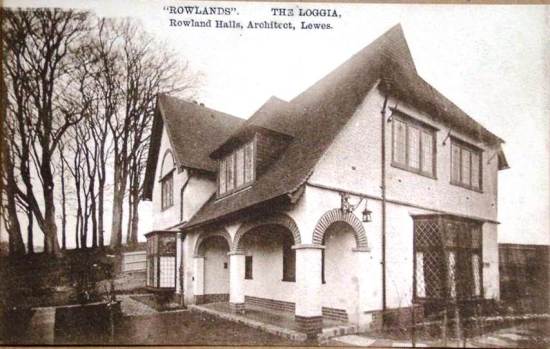 To access this talk, you need to register your intention some days in advance: Click to Register

There is no charge for this talk.

After registering and well before the talk, we will send you a confirmation email containing information about how to join the webinar itself.

Please join the webinar at 7:20pm.

We would recommend a computer screen or an iPad as a minimum screen-size for viewing our webinars.

Our presenters will be speaking live, and you can ask questions by typing in the Q&A box in Zoom.

See the Talks page for a list of  forthcoming monthly events organised by the Lewes History Group.