This talk and accompanying film will look back to the Lewes floods of October 2000 that brought devastation to the lives of hundreds of local people and businesses. Many still remember it vividly, including the extended periods spent trying to get homes and premises back to some kind of normality. Mick and Christine were both amongst the victims.

Mick videoed the aftermath of the Lewes Floods, recording the stories of ordinary people in the town, as well as the heroic efforts of the Emergency Services. He says,”The film includes the photos and testimony of local people describing how the flood affected them, their friends and families. I intercut it with BBC news footage and also put in references to the earlier floods in the 1960s.”

A decade on, in 2010, Christine Hall and co-director Wenda Bradley managed ‘After the Flood’, a project that included an exhibition of flood memories, photos, art, poetry and music. Now, 17 years later, Christine and Mick of Artemis Arts are revisiting the impact on the town and its residents with the film and an illustrated talk.

‘The Darker Shades of Sun Street’, written by Frances Stenlake, with specially adapted music by Valmai Goodyear and acted by a team from Lewes Little Theatre led by Joyce Fisher, as seen at our November 2016 meeting, is being performed again at three Lewes venues this autumn. You have another chance to catch it if you missed it last time, or if you simply want to see it again.

As many of you will be aware Lewes Town Council are restoring and documenting many of the pictures in the Town Hall.  One of the pictures of interest depicts SS Wallands, which was a 185 ton schooner-rigged vessel built for his own use by Lewes timber merchant Edward Chatfield. It was launched from Bridge Wharf on New Year’s Day 1866.

Lewes Town Council are keen to get some help to look into the history of the vessel.  If anyone would like to follow up on this or have information about the SS Wallands please contact Sarah Bayliss at Sarahbbayliss [at] gmail.com directly.

Questions to which the Town Council currently have no answers include:

Editor’s note: One or two of the answers to the Town Council’s questions can be found in John Farrant’s article ‘Shipowning at Newhaven in the later 19th Century’, published in Sussex Industrial History, No.8, pp. 17-23 (1978). Of the 17 ships registered with the port of Newhaven in 1872 eight had Lewes owners. One of these was the ‘Wallands’ owned by Edward Chatfield of Lewes, timber merchant, which had a crew of 9. It was recorded taking timber to the Tyne in 1866 and 1870.

The other four Lewes shipowners were:

This postcard of the Bear Hotel, Cliffe, by an anonymous publisher, was postmarked in 1918, the year before it burnt down. When offered on ebay it sold for £44.

This postcard of Toronto Terrace, also by an anonymous Edwardian publisher, sold on ebay in September for over £80 after very competitive bidding.

The list below of British patents filed by Lewes inventors is  taken from the free Espacenet database, which holds PDFs of British patents from 1893 onwards. The description, normally accompanied  by drawings, can be seen by requesting e.g. publication number GB189518269 [i.e. the year of application plus five digits]. From 1916 assigned numbers changed to a series from 100001, e.g. GB102555, in the order of accepted for publication. This was not the same as being granted a patent, as a final “sealing” fee has to be paid. This explains the occasional “void” stamp on documents showing that it was never granted rights.

The titles given below are often abbreviated. The names, address and occupation details are as given in the patent application.

Marion Smith and Robert Cheesman both contacted us to point out an error in the final section of this item in Bulletin no.86. The Albion Street building that was constructed as the Lewes School of Science and Art, and served later as the Borough Museum and then the Lewes Library, is not today a private residence. It is the offices of the Lewes architects Mackellar Schwerdt.

Surgeon-dentist Mr Sinclair of No.57, Old Steine, Brighton, advertised in the 6 August 1838 Sussex Advertiser that his services were also available in Lewes every Tuesday afternoon at No.12 East Street, “from one to four o’clock punctually”. 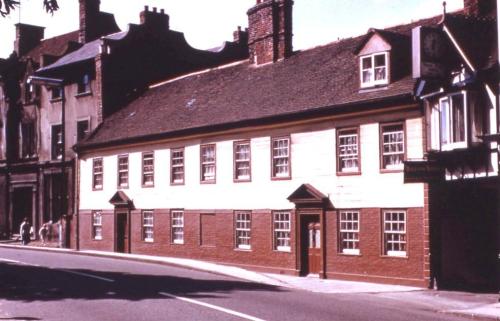 In response to the photograph published in Bulletin no.85, John Davey provided this colour photograph of the houses on Malling Street demolished to make way for Phoenix Causeway. This photograph was taken in 1965 or 1966, at the suggestion of his father, as it was known then that the houses were likely to be demolished.

Colin Brent’s ‘Georgian Lewes’ (page 45) identifies the houses as 46 & 48 Malling Street, and enables them to be linked to Judy Brent ‘s Cliffe tenement analysis and to local directories. The large central chimney stack suggests an origin as a substantial house originating no later than the 17th century, but later extended and subdivided. As is common in Lewes, the facade has been updated, but the superficial impression of polite symmetry does not survive careful inspection. This house was originally on a large plot that extended from 46 to 66 Malling Street and included Thomas Street. Called ‘Baydens’ in the 17th century, the property was owned and occupied by the Gaston family in the 18th century. No.46 was associated with the 19th century Hillman, Elphick and Berry families, all important Cliffe merchants and businessmen. No.48 passed from the Gastons to the Wellers, builders & undertakers, shortly before Queen Victoria came to the throne. The Weller’s business was still here when the houses were demolished. In the 1920s No.46 was occupied by George Frank Burtt, the engineer and railway & postcard photographer.