Back in the 1960s an eccentric headmaster of Lewes Old Grammar School took its records into the yard and burned the lot. This inexplicable act of vandalism gave local author David Arscott a tough, but stimulating, task 50 years later when he was commissioned to write and publish the school’s 500-year history. David will be revealing what he discovered when he gives his illustrated talk. The school’s story has been a roller-coaster ride from the high status of its medieval origins on its original Southover site, where the diarist John Evelyn was a pupil, through a near-terminal decline in the Victorian period on its current site, to today’s thriving community of more than 500 boys and girls. 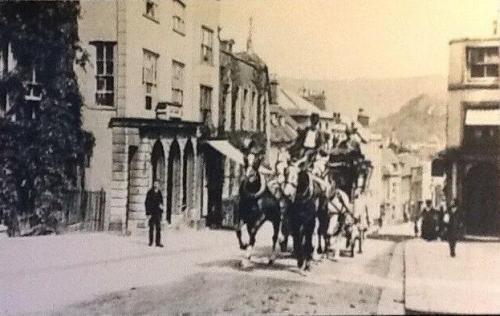 This anonymous postcard showing a coach ascending School Hill was offered for sale on ebay in 2019.

Listed under the heading ‘Professions’ in John Viney Button’s ‘The Brighton and Lewes Guide, published by J. Baxter in 1805 were the town’s doctors, attorneys and academies.

The doctors listed were Blair M.D. and the surgeons Crockford, Hodson, Moore, Ridge and Rickman (only surnames were given).

Source: J.V. Button, ‘The Brighton and Lewes Guide’, printed and published by J. Baxter in 1805.

The school for girls run by the Quaker Godlee sisters in Lewes has an interesting history. Their father John Godlee (1762-1841) was a merchant with a home in Bear Yard in Cliffe. He had married into the Rickman clan; three sons and four daughters grew to maturity.

John Godlee was generous to a fault, and not the best of businessmen and times were hard after the end of the Napoleonic Wars. By 1824, business was ‘not providing sufficient income’. His two eldest daughters, Mary Ann and Sarah, decided that the best way they could help the family – and avoid having to find work as governesses – was to start a school. As women, they needed their brother Burwood to sign the paperwork.

In January 1824, Sarah, began writing what she called a ‘Family Journal’, so we can trace the origins of the school in exact detail. In March she said, ‘Burwood Mary Ann and SG [Sarah] began to talk seriously of some plan for a school’. Her mother’s cousin in Edinburgh, John Rickman was all in favour, but their uncle in Wellingham – another John Rickman – was more doubtful.

They spent some months looking for premises – and pupils – and in December 1824 the two sisters had taken the plunge, Burwood signed the lease on a house in Albion Street, and Sarah wrote, ‘It feels a formidable thing to go into a house with only two pupils but still there must be a beginning – and ours is a very small one’.

Two years later they were so successful that they were having to turn pupils away, and they moved to larger premises, 220 High Street. The popularity of the school was no doubt because the sisters were both kind and well-informed. They taught the girls French, Latin 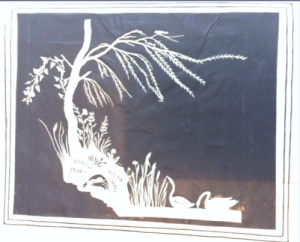 and Botany as well as the basic skills, but they also took the girls on expeditions and visits and made the school as homely as they could.

Sarah was a skilled artist and all the sisters were good at making things and they shared their love of craft with their pupils. The little silhouette image of swans by a willow is the kind of piece that Sarah often cut out for the amusement of children and friends.

The two photographs below are from the collection of my late father. Both were taken in 1888, and include tangential views of the Bear Inn. At this date William Whitcomb was the landlord and the Edwardian boarding had not yet been added to the street facade. 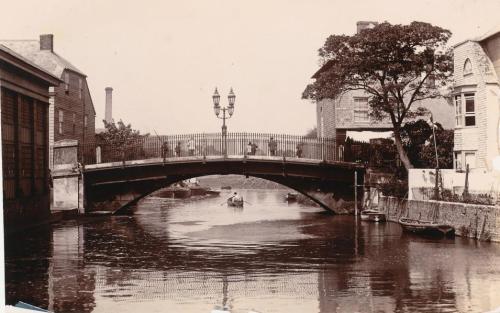 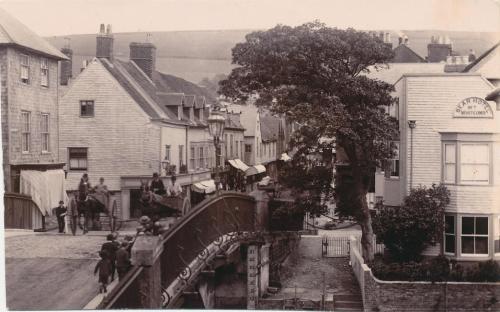 Photographs from the Leslie Davey collection

“On Monday, a soldier went into the shop of Mr Berncastle, watchmaker, of the Cliff, and, under pretence of wanting to buy a watch, took an opportunity of purloining one from the counter, but Mr Berncastle having immediately missed his property, accused the man of theft, took the stolen watch from his pocket, and turned him out of the shop, with a threat that he would report his dishonest act to his officers.

The man proceeded up the town, followed by a lad who had witnessed the transaction, and by whom he was seen to stop at the next shop of the same description, (Mr Irish’s) where he committed a similar offence, and departed with his booty, but the boy who had dogged him from the Cliff, having afterwards reported to Mr Irish what he had been doing there, Mr I. examined his stock of watches, and having also missed one, traced the soldier to a public house, and found his property upon him.

On these charges the soldier was on Saturday examined before the sitting of Justices here, when it appearing, that at times the culprit was subject to temporary fits of insanity, particularly when in liquor, he was delivered over to his commanding officer to be sent to an African regiment.”

In 1811 Solomon Nathan Berncastle (c.1780-1866), watchmaker and jeweller, was at 7 Cliffe High Street. He was born in Trier, Germany, but came to England by 1803 and was established in business in Lewes by 1805. A month after the event above he removed to 38 Cliffe High Street, and then in 1824 (by which time he was a watchmaker, silversmith, jeweller and optician) he moved again to a newly-built shop at 1 Cliffe High Street. He then moved to Brighton to open a similar business there, leaving the Lewes shop to be managed by his partner Samuel Solomon. In 1824 he became the first president of the Brighton & Hove Hebrew Congregation. He encountered some financial problems in 1830, after which he became a Brighton pawnbroker and later a furrier in London. The shop at 1 Cliffe High Street continued as a jewellers, in different hands, until the 21st century, when W.E. Clark moved across the bridge.

Colin Brent’s Lewes House Histories locate Michael Irish, the second watchmaker whose goods were purloined, as at this date the owner-occupier of 45 High Street, at the top of School Hill.

In November 2018 Carol Homewood posted on the Lewes Past Facebook page an 1861 newspaper advertisement for the sale of fireworks by Frederick Beeching, Pyrotechnist, of 1 West Street, Lewes. He was the only licensed fireworks maker in the town and offered the largest and most varied assortment in the county. Shops and Schools would be supplied at London prices, and country orders promptly attended to.